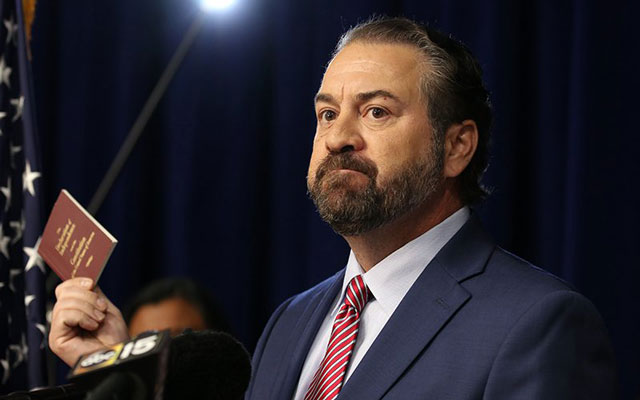 Photo by Ella Ho Ching/Cronkite News: Arizona Attorney General Mark Brnovich holds up a copy of the U.S. Constitution as he discusses his opposition to the Biden administration’s COVID-19 mandate requiring federal employees and contractors to be fully vaccinated by January. “Where in the Constitution does it give any person the authority or the ability to mandate you inject something into your body?” he asks.

PHOENIX – Arizona Attorney General Mark Brnovich has amended his lawsuit against the Biden administration’s COVID-19 vaccine mandate, adding the Phoenix police and fire unions as co-plaintiffs. He and union officials on Monday argued that the mandate will worsen staff shortages.

The complaint, which Brnovich filed in September, was amended Friday to include the Phoenix Law Enforcement Association and the United Phoenix Firefighters Association Local 493 after the city announced that employees must get vaccinated against the coronavirus that causes COVID-19 by Jan. 18. City officials say that because Phoenix has several contracts with the U.S. government, it is a federal contractor and subject to the Biden order.

According to a news release from Brnovich’s office, multiple police officers, firefighters, and other first responders who chose not to get the COVID-19 vaccination now fear losing their jobs, which prompted the attorney general to amend his lawsuit to include the police and fire unions.

Phoenix employees seeking a religious or medical exemption must request it by Dec. 31, according to The Arizona Republic.

“First responders should never have to choose between their jobs or livelihood,” he said during a Monday news conference. “The Biden administration’s unconstitutional mandates are not only an infringement on individual liberty but a fringe on the principles of federalism and violate traditional notions of separation of powers.”

Arizona was the first state to challenge President Joe Biden’s mandate requiring federal employees and contractors to be vaccinated by the January deadline. Brnovich also is part of multistate efforts that challenge Occupational Safety and Health Administration and health care worker mandates. OSHA’s requirement for companies with 100 or more employees to be fully vaccinated or tested on at least a weekly basis, has been paused by legal challenges.

In court records, Brnovich, who is running for U.S. Senate, called the mandate “patently unfair, clearly devoid of common sense, and manifestly unlawful.”

“I would emphasize that this is not an issue about the science or efficiency of whether vaccines are effective,” he said. “It’s a fundamental question of, ‘Does the federal government have the right or have the ability to mandate vaccines?’”

Phoenix Mayor Kate Gallego shared her support for the federal vaccine mandate with ABC15 after the city’s vaccine deadline was announced, saying “this federal program is going to save lives.”

Fire Capt. Bryan Willingham, vice president of the United Phoenix Firefighters Association, said the lawsuit is not a “political battle” for the association but rather a form of addressing a “crisis for the community” should unvaccinated employees be terminated.

Willingham, who is vaccinated, said the association supports its members’ right to choose when it comes to the COVID-19 vaccine and that the vaccination controversy is “dividing” and “hurting the community.”

“We’ve been part of an organization that has always been there for our community,” he said. “We don’t get involved in those personal choices. We protect our members because they’re our family, and they have families that need us.”

According to reporting by ABC15, only 25% of Phoenix police officers and firefighters have voluntarily submitted proof of vaccination.

The mandate also comes during what police and fire departments call staffing shortages. Yvette Bro, vice president of the police union, said a survey it conducted found more than 600 members who said they would leave if they were forced to get a COVID-19 vaccine, adding that the police department “can’t afford to lose one officer.”

“Our focus is, we indeed to keep every single officer and we need to be able to fight for their right to choose,” she said.

Willingham said Phoenix firefighters have already seen the stress that the pandemic has brought. He said they’re working extended hours and have seen “an exponential increase in PTSD.”

“If we lose some of our staffing, we will increase our response times,” Willingham said. “If unvaccinated members are terminated, then our vaccinated members have to step up and work additional hours to fill in those gaps. We do not have the manpower and the staffing.”

The Department of Justice has until Dec. 3 to respond to the amended lawsuit.