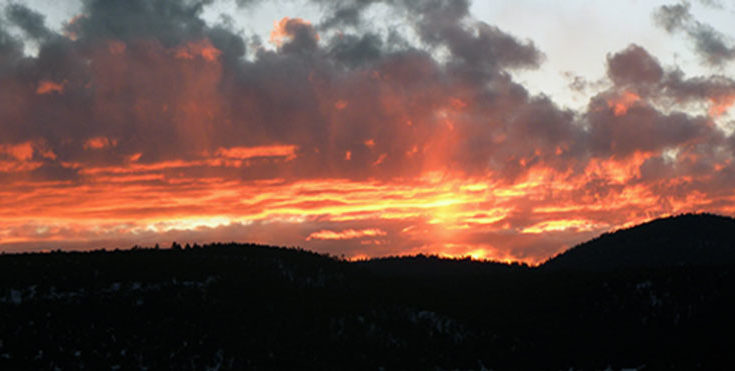 Forest Service Photo: The sun sets in the Apache-Sitgreaves National Forest. The Bringham Fire there has grown to 4,800 acres.

APACHE-SITGREAVES NATIONAL FOREST – The lightning-caused Bringham Fire has grown to 4,800 acres as of Thursday.

According to a release from White Mountain Zone Type 3 Incident Management Team Public Information Officer Steve Johnson, the Bringham Fire is situated in steep, rugged terrain, and these factors resulted in very active fire behavior Wednesday, especially along the southwest flanks. Fire crews successfully completed structure protection at the Rose Peak lookout tower facility, and similar work continues at various cabins of which some are classified as cultural resources.

Driven by wind and terrain, the Bringham fire reached a predetermined trigger point at Red Mountain Overlook on Wednesday. In response, firefighters conducted planned burnout operations along Highway 191 to keep the approaching fire front in check and keep the fire to the east of the highway. Values at risk that have been identified include the highway, area cabins, Rose Peak lookout, campground sites, natural and cultural resources, and threatened and endangered species and their habitat.

The Bringham fire is expected to experience isolated showers and thunderstorms today and Friday, although forecasts aren’t calling for much relief in the form of rainfall. Thunderstorms can produce gusty and erratic winds and can cause fire to spread in all directions, and fire managers are prepared for this weather event.

Burnout operations will continue today if the fire reaches established trigger points along Highway 191, and portable water tanks have been set up along the highway to support helicopter resources in this effort. Burnout operations can produce large amounts of smoke, and although these tactics are vital to successful firefighting operations, smoke from wildfires can be hazardous to your health.

A temporary closure order for the Bringham Fire area went into effect on June 10. The closure includes some forest roads, trails, day-use area facilities, and one campground. The purpose of the temporary area closure is to assure the protection of public health and safety in the closure area during the Bringham Fire activities. The closure order document and map can be found at https://www.fs.usda.gov/detail/asnf/alerts-notices/?cid=stelprd3793918.

The public is reminded that U.S. Highway 191 is closed in both directions between mile-marker 189 (just past Juan Miller road) and mile-marker 225. ADOT signage is in place near both blockades on the highway. ADOT issued a traffic advisory yesterday for U.S. Highway 191, and more information can be found at https://azdot.gov/adot-news/us-191-closed-eastern-arizona-mountains-due-bringham-fire.

A temporary flight restriction is in place over the fire area. Wildfires are a No Drone Zone. For more information visit the Know Before You Fly website at http://knowbeforeyoufly.org.

Fire information can be found on InciWeb at https://inciweb.nwcg.gov/incident/6747/. Information about the Apache-Sitgreaves National Forests can be found at www.fs.usda.gov/asnf.