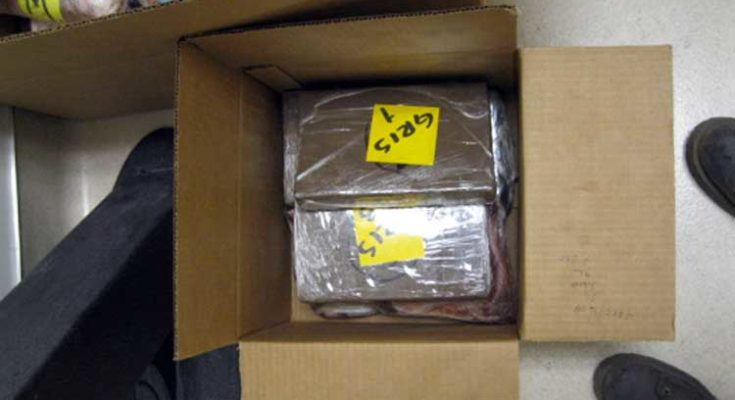 Contributed Photo/Courtesy DPS: More than 92 pounds of meth was seized during the traffic stop.

Methamphetamine, fentanyl, and heroin seized, with the amount of fentanyl seized capable of killing more than 1 million people

PIMA COUNTY — On May 30, just before 10 a.m., a member of the DPS Border Strike Force conducted a traffic stop on a Ford pickup for a traffic violation on westbound I-10 in Pima County. After observing numerous indicators of criminal activity, the vehicle was searched. During the search, methamphetamine, fentanyl and heroin were found.

“The Border Strike Force, time and time again, has proven successful since its inception in 2015,” said Governor Doug Ducey. “Drug and human trafficking in Arizona (are) real and this seizure is only one example of many showing our dedicated effort to making Arizona and the entire country safer.”

Wrapped in clear plastic, 92.55 pounds of methamphetamine, 8.15 pounds of fentanyl, and 1.8 pounds of heroin (equivalent to 816,000 hits) were seized. With 2 milligrams of fentanyl being a potentially lethal dose, the amount of fentanyl seized is capable of killing more than 1 million people. The driver of the pickup was arrested on multiple charges and was booked into the Pima County Jail. He has been identified as Gustavo Vicente Torres Garcia, 40, of Mexico and was booked on charges of possession of a dangerous drug for sale, transportation of a dangerous drug for sale, possession of a narcotic drug for sale, and transportation of a narcotic drug for sale.

Detectives from the Border Strike Force Criminal Targeting Unit, as well as highway patrol troopers, responded to assist with the investigation. The Arizona street value of the seized drugs is estimated to be slightly more than $520,000.

Colonel Frank Milstead said, “This significant seizure shows the dedication of our Border Strike Force in disrupting the flow of these illegal, extremely dangerous drugs from hitting not only our streets but streets across the nation. These drugs are plaguing our nation and we stand on the front lines to combat it.”

The ultimate goal in the creation of the Arizona Border Strike Force is to deter, disrupt and dismantle transnational criminal organizations that breach the border in their quest to set up business in our state. Specific units within the Border Strike Force Bureau include the Canine District, the Southern Investigations District, and the Vehicle Theft District.