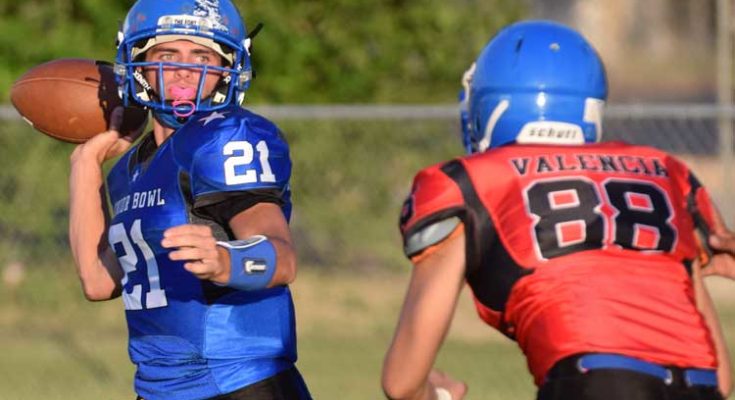 Photo By Raymundo Frasquillo: Evan Stringfellow of Fort Thomas directs Blue’s third possession, waiting for receivers to get open on his initial pass attempt. Red’s Frank Valencia of Hayden blocked the pass, but the drive covered 85 yards in 8 plays and resulted in a 15-yard TD catch for a 14-8 Blue lead early in the second quarter.

DUNCAN – There were no Bowl Championship Series coaches in Duncan earlier in the month. On hand were parents, sweethearts, siblings, friends, neighbors, and fans of high school football.

Thirty-six of the best graduated 8-man football players from the 2017 season suited up for their final prep game June 2. Blue walked off Packer Field with a 52-28 triumph over Red, having led 30-14 at halftime and 46-28 after three quarters. The score was deadlocked 8-8 following the opening quarter.

Blue amassed 542 offensive yards on 65 center snaps and earned 16 first downs compared to 313 yards on 58 snaps and 12 first downs by Red. Blue scored 42 points on seven touchdowns, four passes, and three runs, plus 10 points with five conversions, four runs plus a pass while Red had 24 points on three TDs and a 55-yard kickoff return plus four points on two conversions, a run, and a pass. Official individual statistics were not kept.

“The players were great,” Walker said. Five practice sessions preceded the game, one on May 30, three on June 1, and one on the morning of the game.

Red won the coin toss, elected to receive, and a ball-jarring hit on the opening kick-off returner yielded a recovery by Blue’s Manny Ramirez of Valley Lutheran.

Four plays, alternating runs with passes, the second for an 18-yard scoring reception by Bagdad’s Delgado from schoolmate Loveall, covered 45 yards. Loveall succeeded on the first of his four conversion runs to give Blue an 8-0 advantage with slightly more than a minute elapsed in the game.

Red covered 60 yards in 12 plays, 10 runs, and two passes, scoring on an 11-yard run by Mayer’s Wilhide. Mogollon’s McLean added the conversion run to tie the score 8-8 with over five minutes left in the opening quarter.

Blue’s third possession, directed by Evan Stringfellow of Fort Thomas, covered 85 yards in eight plays. Ray’s Fabian Valenzuela capped the drive with a 15-yard reception. The conversion attempt was stopped. Blue led 14-8 with over 10 minutes left in the half.

Blue drove 60 yards in six plays for a third score. Valenzuela ran in from a yard out on 2nd–and-goal and Salome’s Oscar Cruz Jr. caught the conversion pass from Loveall. Blue led 22-8.

Blue used five plays, three passes, and two runs to cover 79 yards, scoring on 2nd-and-goal from the one. Lovell ran in to double the margin and added a conversion run for a 30-14 Blue advantage.

Delgado sacked Red’s Wilhide for a four-yard loss on first down, a run went for no gain on second down, a completed pass yielded no gain, and an incomplete pass on fourth down returned possession to Blue with 13 seconds left in the half.

Red’s Valencia sacked Blue’s Stringfellow to run down the clock with Blue leading 30-14.

Blue drove 85 yards in six plays to start the second half, Loveall connected with Valenzuela for a 35-yard score and Lovell added the conversion run for a 24-point margin.

A short kick allowed Red’s Jensen of Mayer to return the ball for a 45-yard score seconds later. The conversion run was stopped. The deficit was 18 points.

Blue gained 28 of 80 yards and was forced to punt on 4th-and-17 after seven plays, while Red drove 91 yards in seven plays before fumbling. Blue’s Jose Armenta of Salome recovered, but a loss plus two consecutive incomplete passes forced a punt on 4th-and-11.

Red lined up inside the 10, gaining three yards on a recovered first down fumble, four on a completed second down pass, and a 3-yard third down run for a TD. Noah Horn of Mogollon crossed the goal line and caught the conversion pass from Diego Pedraza of Williams to narrow the deficit to 10 points with 2:53 remaining in the third quarter.

Thirteen seconds later, a blown defensive assignment left Delgado wide open on a pass from Loveall that he turned into an 80-yard score. Lovell added the conversion run to give Blue an 18-point margin.

Loveall intercepted a Pedraza pass after Red gained 17 yards on two plays, but Blue punted on 4th-and-10 after getting 11 of 76 yards on six plays and again on third down after two successive sacks lost 16 yards.

Red lost seven yards on 4th-and-6 and was intercepted on its ensuing possession by Tafoya of Bagdad before Blue added its final score of the game. A seven-play, 35-yard drive was capped by Valenzuela. The conversion pass was short.