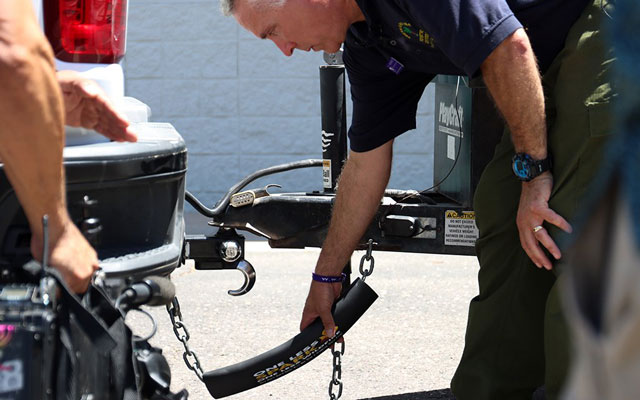 Photo By Troy Hill/Cronkite News: Brad Bramlett, a member of the National Fire Prevention Team, which visited Arizona, demonstrates the importance of securing trailer chains on vehicles at Phoenix-Mesa Gateway Airport on June 8. Loose chains can spark against the road when a vehicle is moving, which can ignite dry grasses.

PHOENIX – Warm and windy conditions Tuesday were pushing the Pipeline Fire north of Flagstaff toward Schultz Pass, prompting some evacuations under towering plumes of ash and smoke.

The fire, which was reported Sunday morning, has burned more than 20,000 acres roughly 6 miles north of Flagstaff, according to InciWeb, which tracks wildfires across the country.

The blaze is one of two in the Coconino National Forest: The Haywire Fire east of the Pipeline, reported Monday, so far has burned more than 4,000 acres.

Several Flagstaff neighborhoods have been evacuated, including around Arizona Snowbowl, and several others are set to evacuate. Flagstaff Mayor Paul Deasy issued a declaration of emergency Monday.

In addition to the fires near Flagstaff, others are burning near the border with Mexico, and one is burning in eastern Arizona.

The exact causes of the Flagstaff blazes are unknown, but Matthew Riser, 57, has been arrested in connection with the Pipeline Fire, according to court documents obtained by The Arizona Republic. He was seen leaving the area in his vehicle, was taken into custody during a traffic stop, and has had an initial appearance on a charge of violating natural resources. He told authorities he had burned used toilet paper and placed it under a rock, assuming it would go out.

A Facebook post by the Coconino National Forest on Monday said 11 engines, three water tenders, three hotshot crews, one hand crew, four dozers, various aerial resources, and miscellaneous overhead have been allocated to the Pipeline Fire. For the Haywire fire, 10 engines and more dozers have been requested.

More than 300 people are fighting both fires. Personnel are prioritizing evacuating people from the area, according to fire incident commander Aaron Graeser.

How to prevent wildfires

The recent blazes are timely reminders of the need to protect the Arizona landscape.

About 90% of wildland fires are caused by humans, according to the Arizona Department of Forestry and Fire Management. And with long-term drought, the term “wildfire season” is close to becoming outdated, as fires can happen at any time of year.

There are several, simple ways to contribute to fire safety, said Brad Bramlett, a member of the National Fire Prevention Education Team, which visited Arizona last week. One is to watch where you park on the sides of roads and highways. Wild grass and other vegetation are extremely dry this time of year, especially with the Southwest’s prolonged drought, and can ignite at temperatures of 500 degrees. The underside of cars can reach 900 degrees.

The solution is simple: Park on gravel or areas with no dry vegetation.

Another easy prevention method is to pay attention to chains used to attach trailers to vehicles, Bramlett said, because a steel chain dragging on pavement can send sparks into dry roadside vegetation.

The solution is to secure chains so they don’t touch the pavement or cover them in insulation, so if they do contact the road, they won’t create sparks.