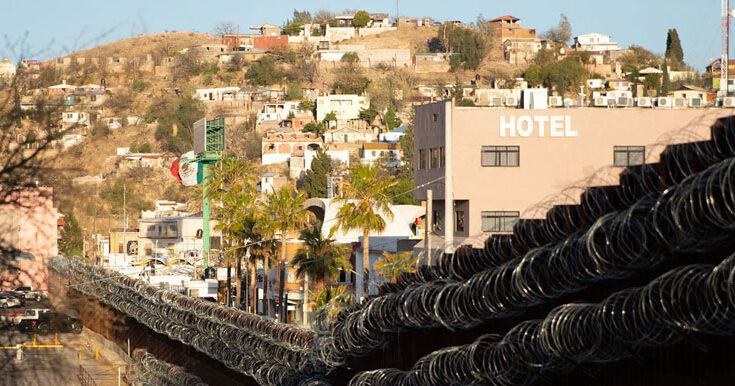 Photo by Kenny Quayle/Special to Cronkite News: A fence outfitted with razor wire separates the U.S. from Mexico in Nogales. The fence does little to stop would-be drug smugglers, however. In the fiscal year 2020, agents seized more than 42,645 pounds of cocaine, 5,222 pounds of heroin, 324,973 pounds of marijuana, 156,901 pounds of methamphetamine, and 3,967 pounds of fentanyl.

ARIVACA – A harsh wind bellowed through the desert as a tumbleweed drifted across the land. Jim Chilton gazed out a window of his adobe home toward the Mexico border, just 20 miles away.

Chilton’s proximity to the border comes with complications, including drug smugglers carrying the deadly synthetic opioid fentanyl. The 5 miles of Chilton Ranch not protected by a border fence leave the property especially vulnerable to cartel activity, he said.

People and drugs have been flooding across the border for years, and Chilton has more than a thousand hours of his own security footage to prove it. He has noticed changes over time.

“We had lots of bags of drugs four or five years ago – big backpacks of marijuana,” he said as he navigated his pickup over the rugged terrain. “But the bags and backpacks have decreased in size. Now, it’s evidently cocaine, fentanyl, heroin, meth.”

‘Anything over 2 milligrams will kill you’

Overdose deaths in the U.S. hit a record high in 2020 and are continuing to rise, driven primarily by synthetic opioids – especially illicitly manufactured fentanyl, which often is laced in pills or cocaine.

Although marijuana traditionally has been one of the most profitable cash cows for Mexican cartels, the steady legalization of cannabis in U.S. states has prompted a change in course. Fentanyl also is more profitable, with a gram going for $150 to $200 on the street, compared with about $15 for a gram of weed.

Fentanyl, which was developed in 1960 to manage pain in cancer patients, is smaller and easier to transport, leading to its increased flow across the border.

Chilton said one strategy used by smugglers is to wait for asylum-seekers to be picked up by Border Patrol agents, keeping them busy so the smugglers can make a run for it.

“Everybody’s always in camouflage,” Chilton said, “and they just bolt when you get up on them sometimes.”

He said the unfinished border fence only makes the problem worse.

Although Mexico remains the main foreign source of marijuana in the United States, “Mexican marijuana has largely been supplanted by domestic-produced marijuana,” according to the Drug Enforcement Administration’s 2020 National Drug Threat Assessment.

Those figures coincide with legalization in the U.S., where Colorado and Washington were the first states to approve recreational marijuana use in 2012, followed by Alaska, Oregon, and Washington, D.C., in 2014.

In Arizona, medical marijuana was legalized in 2010, and voters in November approved recreational use. Medical use of marijuana is allowed in 36 states, while recreational use is now legal in 18 states, according to the National Conference of State Legislatures.

Enter fentanyl, a lab-made opioid that’s relatively easy to create, with a death threat lurking behind every dose.

On a recent visit to the DEA’s Nogales office, Special Agent Rene Amarillas shows me a photo of a minuscule amount of fentanyl on a shiny penny, for scale.

Amarillas nods and says, “Anything over 2 milligrams will kill you.”

The dab on the penny is smaller than a grain of rice.

Although the fentanyl seizures may not seem like much in comparison, the lethal potency of the drug makes the numbers especially troubling.

From April 2020 through March 2021, there were nearly 97,000 drug overdose deaths in the U.S., and 75% of those involved an opioid. In the same 12-month period the year before, 73,000 overdose deaths were reported, with 71% involving an opioid, according to the Centers for Disease Control and Prevention.

Jacob Guerrero, 31, was one of those fatalities. He died in May 2020 after taking cocaine that had been laced with fentanyl. His mother, Theresa Guerrero of Tucson, believes the COVID-19 pandemic played a role in his drug use and death.

“He was, like so many other people, really lonely, and I remember he would go on drives by himself just to get out of the house,” Guerrero told Cronkite News earlier this year. “I have to wonder if he had been able to see other people, would they have noticed what he was going through before I did?”

Cartels that cook and move fentanyl across the U.S.-Mexico border are largely responsible for overdose deaths like Jacob’s. They import precursor chemicals from India and China to make the drug, but U.S. officials report the cartels recently have begun producing the chemicals on their own, essentially eliminating the middleman.

“The mass quantity of fentanyl already in pill form is coming from Mexico. And it’s clandestinely produced in different cities,” Amarillas said, describing covert labs tucked away in tropical jungles. “And we have seen direct cases where university chemists have been involved.”

“While a major entry point for fentanyl is the Southwest border, the cartels are spreading their poison into communities across the nation,” he said. “Through this initiative, we’re tackling a very real public health, public safety, and national security threat, identifying the most egregious street-level networks in our communities and working our way up through the supply chain.”

The cartels are relentlessly creative about how they move their product. In March, canine units sniffed out $60,000 worth of fentanyl stuffed into breakfast burritos in Yuma. Secret tunnels, including some in Nogales, also have been used.

“When I was public works director, I used to fill these tunnels with concrete,” Nogales Mayor Arturo Garino said in an interview.

The most elaborate tunnel he found was 50 feet from the port of entry, dug near an abandoned hotel, he said. It led to a parking lot near the border, where the cartel drilled a “perfectly round core” fit with a hydraulic jack to bring it back up to street level seamlessly.

“A car would park there diagonally with a false bottom, and they would put the hydraulic jack down and stuff packs of cocaine up into it,” Garino recalled. Mario Morales, chief deputy of the Santa Cruz County Sheriff’s Office, said officers find the tunnels sporadically.

“It’s hit and miss. You can find a tunnel today and another one next week, or you can go months without finding one,” he said.

Still, some smugglers are simply walking the product across the border in backpacks. From December through February, Chilton’s security footage recorded 120 people carrying what he believed to be drugs.

The flow of migrants and asylum-seekers across the border can make it more difficult for agents to stop the drugs.

“When Border Patrol is busy doing their paperwork, they’re running the drugs through several miles in different locations,” Chilton said. “So in a sense, the asylum-seekers become decoys.”

There are far more to these operations than drug tunnels and labs concealed in the jungle, though. Officials report the cartels now are recruiting American teenagers to move drugs across the border.

“In Nogales High School, we’ve seen cases where kids have been recruited,” Amarillas said. “It is a concern, and it occurs throughout the border states. San Diego had a case in the last couple of years where they were recruiting students out of a high school to serve as couriers.”

CBP Agent Alan Regalado created a program called T.E.A.M. Kids to keep that from happening. The organization partners with Arizona schools along the border and in Phoenix and Tucson, to teach kids about the dangers and consequences of working with cartels.

Regalado began working with Nogales High students in 2017 through a program called Operation Detour, then realized that cartel recruitment could start with children as young as 12.

“A lot of these kids think because they’re minors that there’s not going to be any consequences for them for smuggling or for being part of a criminal organization,” Regalado said in a phone interview, but that’s incorrect.

“At the end of the day, the cartels really don’t care about the kids’ lives. They are just focused on the monetary gain,” he said.

He warns parents whose children may be at risk of recruitment to watch for sudden changes in attitude or the acquisition of expensive items – “the kids are wearing nice watches or buying things that their parents aren’t buying them,” he said.

Though most of the drugs coming across the border bypass Nogales for far bigger destinations, the city of 20,000 is not immune to the overdose crisis. The Santa Cruz County Sheriff’s Office reported an increase in all drug overdose calls in 2020 – 19, up from six in 2019 and four in 2018.

Abraham Cedeno owns Huff & Puff Smoke Shoppe, nestled behind the Candlewood Suites and Holiday Inn Express in Nogales. He’s had customers come in and ask for drugs harder than the nicotine pens and CBD creams he sells. But he stays away from all of that. Both his younger brothers died of fentanyl overdoses in Nogales, Cedeno said.

Chief Deputy Morales notes that different fentanyl analogues have far different levels of potency – ”some are up to 1,000 or 2,000 times the potency of heroin or morphine; some are 100, 200 times, some 60 times.”

“A lot of people, unfortunately, have addiction problems, and they’re looking for the next high and it doesn’t take much,” Morales said.

“The next high that they’re looking for typically kills them.”