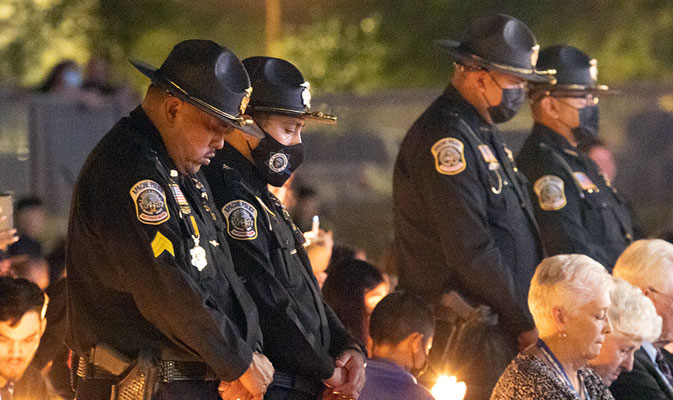 Photo By Kasey Brammell/Cronkite News: Officers mourn the loss of friends and co-workers who died in the line of duty.

PHOENIX – Families hugged as tears streamed down their faces. Everyone held a candle as bagpipes played, remembering the 17 Arizona law enforcement officers who made the ultimate sacrifice over the past two years.

The memorial service on Sept. 29 was emotional, yet the approximately 200 attendees shared a sense of care and love for one another. People who had never met or even crossed paths now share a sense of community.

Jan Blaser Upchurch comes to the memorial each year to remember her husband, who was killed in the line of duty two decades ago.

“It’s like you always have a somber feeling, but also a feeling of hope and a feeling of continued love and support for other people,” said Blaser-Upchurch, a member of the Peace Officers Memorial Board.

Sgt. John Blaser, 36, a 10-year veteran of the Department of Public Safety, and his partner, Officer David Gabrielli, 43, were killed by a drunken driver in 1990.

“He was happy doing that,” she said. “He loved his job, and that’s the thing I think of when I think of him and so many others. I just loved him so much and was just devastated by his loss.”

The newly renovated memorial includes the names of 269 peace officers who have died in the line of duty since the mid-1800s. The renovation included the addition of new statues with the names of fallen officers and a thin blue line of light. As more officers died in Arizona, the old memorial did not have enough room for their names.

Gov. Doug Ducey told the crowd “we will always support our officers, and the losses we mourn today remind us why that commitment is so important.”

Police motorcycles lined the walkway from the Capitol to Wesley Bolin Memorial Plaza as family members of all fallen officers walked, hand in hand, to their seats.

One by one, the names of the 17 officers were called, and Ducey and Attorney General Mark Brnovich presented family members with a plaque and a state flag. Soft sobs were the only sounds heard.

Nationwide this year, COVID-19 is the leading cause of line-of-duty deaths, according to the Officer Down Memorial Page.

Of the 269 officers whose names are on the Arizona memorial, 143 were killed by gunfire, 26 in vehicle crashes, and two of COVID-19. Some other causes of death include explosions, stabbings, and aircraft accidents.

When Blaser-Upchurch’s husband died, she began to honor him and support other survivors who had lost a loved one. She volunteers many hours each year to help the new survivors remember those who no longer are here.

“And that is important to reconnect with all of those survivors on nights like this to where we are all together, we are all supporting one another and remembering and honoring our fallen officer,” she said.

Blaser-Upchurch became close friends with the wife of her husband’s partner because they were grieving at the same time. They leaned on one another for support and comfort during the most challenging periods of their lives. She hopes the public will recognize and continue to honor the men and women who risked their lives for public safety.

“When they are injured or are killed, we should always remember their sacrifice,” she said.

As of Oct. 21, 25,225 line of duty deaths have occurred nationally since 1776. The Arizona fallen officers also will also be honored next May during National Police Week in Washington, D.C.