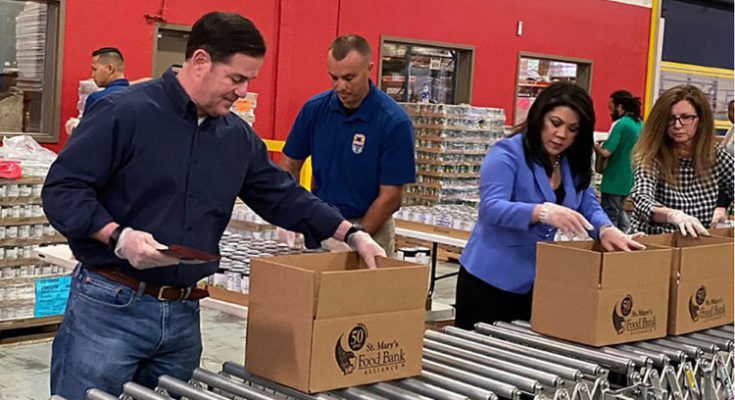 Photo Courtesy Doug Ducey via Twitter: Gov. Doug Ducey on Thursday activated the Arizona National Guard to restock grocery stores and food banks. He also urged Arizonans to volunteer at food banks if they have the time.

As of Saturday morning, only four of Arizona’s 15 counties do not have a positive test for COVID-19

PHOENIX – Gov. Doug Ducey on Thursday took additional measures meant to combat the spread of COVID-19 in the state, and Arizonans took to social media to respond with praise, concerns, and frustration.

As of Saturday, the number of confirmed COVID-19 cases in Arizona had jumped to 104 – more than double the 44 cases when Ducey made his announcement Thursday – and the state had recorded its first coronavirus death, according to the Arizona Department of Health Services.

As part of the plan, Ducey activated the Arizona National Guard to restock grocery stores and food banks, halted elective surgeries, extended closures for schools and ordered some bars, movie theaters, and gyms to close. He also extended school closures by two weeks. And on Friday, Ducey announced the state will move the deadline for filing and paying state income taxes from April 15 to July 15, and he plans to issue an executive order to expand access to unemployment insurance.

In counties with confirmed COVID-19 cases, Ducey ordered bars, movie theaters and gyms to close, and restaurants must provide dine-out options only. The respiratory virus so far has been detected in all but four of Arizona’s 15 counties: Only Gila, Greenlee, La Paz, and Mohave were without confirmed cases as of Saturday, the state health department said.

Phoenix Mayor Kate Gallego took to Twitter to praise Ducey, saying she is glad to see the governor take these actions. “Cities led but now we can work collaboratively to #StopTheSpread,” she said in a tweet.

However, some residents expressed support for the moves, while raising concerns about ongoing issues.

Kristie O’Brien, who identified herself as an attorney and an active Democrat, replied on Twitter: “Finally! Thank you! Now it would be helpful if the testing in the East Valley was ramped up and we could actually find out how many of us have been walking around with it getting groceries before we hit that curve!! #FlattenTheCurve.”

Sen. Kyrsten Sinema, D-Arizona, said she was happy Ducey took action, as she had urged him to do so before. However, she also said the executive order should apply throughout Arizona, not just in afflicted counties.

She tweeted: “When @dougducey announced his order saying only affected counties must comply, 6 were impacted. ONE HOUR LATER, 2 more counties reported cases. It is not rocket science guys – this virus is spreading very fast. Take action now.”

And some people on social media said the moves were an overreaction. One Twitter user commented: “The numbers don’t justify crashing the world economy which is what government officials have decided to do.”

Ducey’s order halting all elective surgeries is designed to free up medical resources and maintain capacity for health care providers.

On Twitter, Lyn Ramirez replied: “Elective surgeries will be decided by who? Elective is a slippery slope.”

The Arizona National Guard will help grocery stores and food banks, which are facing “unprecedented demand, and this assistance will help ensure the continuation of food supply,” according to the Governor’s Office statement.

The Arizona Army National Guard has six major commands with about 5,100 soldiers, according to the Arizona Department of Emergency and Military Affairs.

In a statement Thursday night, the National Guard said its members are “proud to support the governor’s robust, integrated action plan.”

“Our Guard members take this mission seriously as they are from the cities and towns we are about to serve,” the statement said. “Domestic response is part of what we do as we’ve demonstrated in emergencies such as airport security after 9/11, Monument Fire in 2011, Havasupai Floods in 2018 and Hurricane Harvey in 2017.”

In a separate action Thursday, Ducey and Superintendent of Public Instruction Kathy Hoffman announced a two-week extension of school closures through April 10. The officials said they would continue to provide updates on school closures beyond that date.

Earlier in the week, Ducey and Hoffman had ordered a statewide closure of schools through at least March 27.