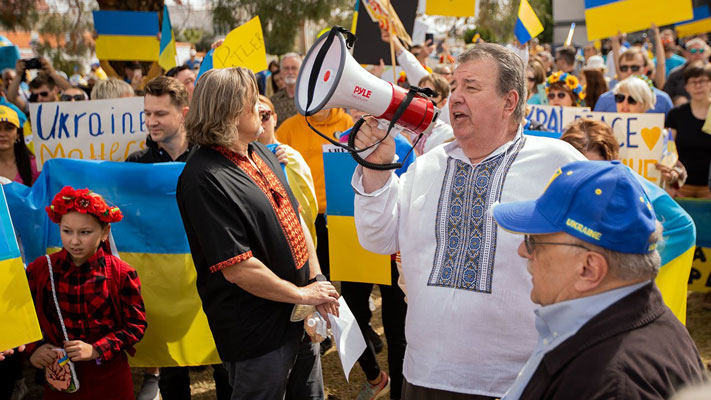 PHOENIX – Hundreds of demonstrators marched from the Ukrainian American Cultural Center to Colter Park in central Phoenix on Sunday in support of Ukraine.

After a larger turnout than expected, demonstrators marched further than the intended destination of 7th Street and Camelback, drawing attention and honks of support from passing cars.

The event was organized by the St. Mary’s Protectress Ukrainian Orthodox Church of Ukraine shortly after Russia launched a full-scale invasion of Ukraine last week – following weeks of Russian troops gathering at the Ukrainian border for what Russia President Vladimir Putin claimed were military exercises.

The Facebook announcement for the event called on “all Ukrainians, Ukrainian-Americans, friends, and supporters of Ukraine from all over Arizona to come and show your solidarity with Ukraine, and support for its independence, and territorial integrity within its internationally recognized borders, including Crimea and the temporarily occupied regions of eastern Ukraine.”