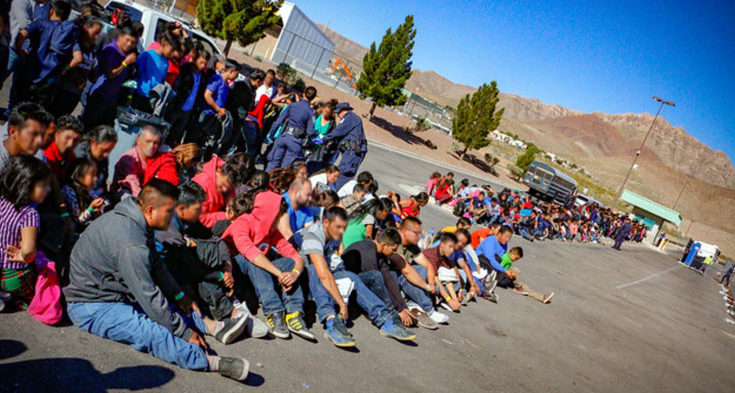 Contributed Photo/Courtesy U.S. Customs and Border Protection: Agents took custody of 1,036 people after they illegally crossed the border in one swoop in May 2019 prior to the pandemic. Some believe President Joe Biden’s decision to end Title 42, which deals with pandemic restrictions at the border, will result in an increase in migrants.

ARIZONA – On Friday, Arizona senators Mark Kelly and Kyrsten Sinema issued joint statements against President Joe Biden’s decision to end Title 42 without having a plan to deal with the fallout in place.

“This is the wrong decision. It’s unacceptable to end Title 42 without a plan and coordination in place to ensure a secure, orderly, and humane process at the border. From my numerous visits to the southern border and conversations with Arizona’s law enforcement, community leaders, mayors, and non-profits, it’s clear that this administration’s lack of a plan to deal with this crisis will further strain our border communities. Despite this decision, I’m going to continue pushing for Arizona to get every additional resource that we can to assist at the border,” said Senator Kelly.

On Friday, an order from the Centers for Disease Control and Prevention ended pandemic restrictions known as Title 42 as of May 23. The order had been in place since March 2020 to quickly expel migrants at the border due to health concerns related to the COVID-19 pandemic.

Many believe the expelling of Title 42 will lead to an increase in migrants.

“Prematurely ending Title 42 without a comprehensive, workable plan would put at risk the health and safety of Arizona communities and migrants. Today’s decision to announce an end to Title 42 despite not yet having a comprehensive plan ready shows a lack of understanding about the crisis at our border. I’ll continue pushing for transparency and accountability from the Administration to help secure the border, keep Arizona communities safe, and ensure migrants are treated fairly and humanely,” said Sinema, Chair of the Border Management Subcommittee.

Last week, Kelly and Sinema spoke with U.S. Homeland Security Secretary Alejandro Mayorkas to discuss the Administration’s Title 42 contingency plans. Both senators underscored how Arizona communities and migrants could be harmed if a Title 42 end is not accompanied by proper planning, coordination, and resources. Sinema also raised concerns she heard from her recent virtual border roundtable with federal and non-governmental partners in Arizona, and other conversations she has had with Arizona DHS officials. Sinema called for DHS to launch an intergovernmental coordination effort to ensure communication between federal, state, local, and non-governmental partners to strengthen cooperation. Secretary Mayorkas agreed to move forward with that strategy across the country. Kelly emphasized the need for proactive engagement and clear communications between the Department of Homeland Security, Congressional offices, local officials, sheriffs, and local governments. He also asked Secretary Mayorkas for details on how the increased funding Kelly and Sinema secured in the omnibus for border management and security will be used, especially as Title 42 is lifted.

Recently, Kelly and Sinema sent a letter to President Biden expressing concerns that an abrupt end to Title 42 enforcement without a comprehensive response plan in place could harm Arizona communities and migrants and greatly increase the strain on the Department of Homeland Security, and local nonprofits that are already near or at capacity due to the current border crisis. Kelly and Sinema’s letter states that Title 42 authority should not be used indefinitely, but points out that migrants and Arizona communities could be harmed if an ending to Title 42 is not accompanied by proper planning, coordination, and resources.