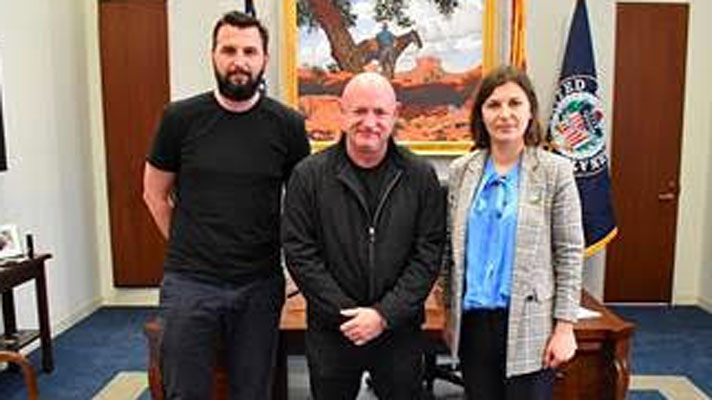 WASHINGTON D.C. – On Monday, Arizona Senator Mark Kelly met with Ukrainian advocates visiting DC and Ukrainian Arizona constituents, to discuss Russia’s illegal and unprovoked invasion of Ukraine as well as his support for the humanitarian and military Ukraine aid package that will come for a vote on the Senate floor this week. Kelly, a Navy combat veteran who flew 39 combat missions during the first Gulf War, recently traveled to Europe and Asia on a nine-day congressional delegation where he met with Ukrainian refugees, American troops, and U.S. military leadership in Poland and Germany.

In his Washington, D.C. office, Kelly met with Ukrainian advocates Daria Kaleniuk, founder and executive director for the Anticorruption Action Centre, and Ihor Bezkaravainyi, former Deputy Minister for Veterans Affairs of Ukraine and a Ukrainian military veteran. They discussed their experiences and advocacy work as well as additional ways the U.S. can continue its strong support for Ukraine. Kelly first met Kaleniuk in Poland while on a congressional delegation in March.

Following his meeting with Kaleniuk and Bezkaravainyi, Kelly met virtually with Ukrainian Arizona constituents where he heard their concerns about the ongoing war in Ukraine and Russian war crimes, as well as how Congress can continue to support the people of Ukraine against Russia’s aggression.

Kelly has worked to secure military and humanitarian assistance to Ukraine through his role on the Senate Armed Services Committee (SASC) and as Chair of the Subcommittee on Emerging Threats and Capabilities (ETC), the committee overseeing security cooperation policy. In January, Kelly voted in favor of sanctions related to the Nordstream 2 pipeline that was built to bring Russian natural gas to Europe. Since the start of the war, he has been outspoken in his condemnation of Putin’s invasion, his support for sending needed military and humanitarian assistance to Ukraine, and his support for maximum pressure sanctions on Putin and his backers. Kelly helped pass the most recent Ukraine aid package that has gotten weapons and other aid to Ukraine.