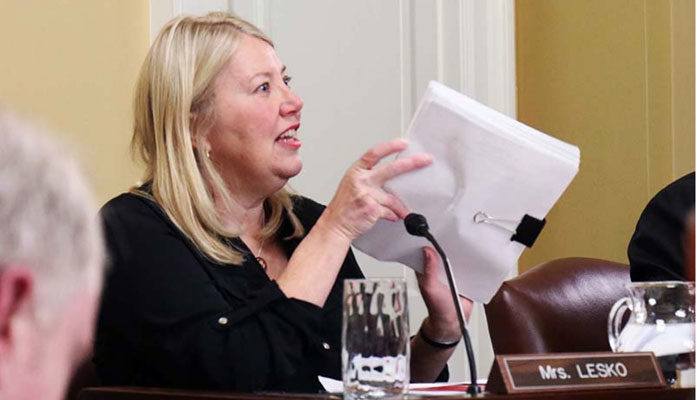 Photo By Andrew Howard/Cronkite News: Rep. Debbie Lesko, R-Peoria, joined the majority of House Republicans to vote against a measure terminating President Donald Trump’s declaration of a national emergency at the border, a declaration Democrats called little more than a ruse to get around Congress.

Trump said the declaration is needed so he can shift $6.7 billion, most of it from the Defense Department, toward construction of a border wall after Congress budgeted just $1.375 billion for this year.

Critics said there is no emergency – pointing to the president’s comment that he “didn’t need to do this, but I’d rather do it much faster” – calling the declaration little more than a ruse to get around Congress.

“The declaration violates separation of powers and puts at risk important infrastructure projects at Luke Air Force Base and other military installations,” Rep. Greg Stanton, D-Phoenix, said on Twitter before Tuesday’s vote.

But Republicans who defended the president said he had little choice but to declare an emergency.

“It’s unfortunate that the president had to resort to this because Congress – the Democrats – would not vote for border security, and so I support the president in his declaration for emergency,” Rep. Debbie Lesko, R-Peoria, said on the House floor Tuesday

The resolution had 234 co-sponsors – only one of whom was a Republican. While House Speaker Nancy Pelosi called the resolution “bipartisan” and urged Republicans to back it, just 13 of them crossed the aisle Tuesday.

In Arizona, all five Democrats voted for the resolution and all four Republicans voted against.

“Democrats have spared no efforts to undermine President Trump’s agenda – specifically when it comes to border security,” Rep. Andy Biggs, R-Gilbert, said in a statement following the vote. “They would rather have a porous border, where tens of thousands of illegal aliens, including human, drug, and sex traffickers … illegally enter.”

“Fulfilling a campaign promise is not a national emergency, and Senate Republicans must now make the decision to support the Constitution or the emperor in the White House – and I certainly hope it’s the former,” he said in a statement released by his office.

The resolution’s fate is less certain in the Republican-controlled Senate. But only a handful would need to cross the aisle for the measure to pass, and Susan Collins of Maine and Thom Tillis of North Carolina have already said they will likely vote to terminate the national emergency.

Even if it gets out of the Senate, Trump has vowed to veto the measure and neither chamber of Congress is likely to have to votes for an override.

Lesko said the partisan divide over this issue could make it difficult for lawmakers to reach agreement on other border-related topics.

“I think there are issues we can work on in a bipartisan fashion but unfortunately it’s become so polarized on the border issue,” she said. “It’s unfortunate because I don’t think immigration reform that is needed is going to happen in the near future because it’s just too divided.”

Biggs said he hopes the dispute has led other lawmakers to realize that “Congress has ceded too much power to the executive branch.” But he said he voted to support the president this time because Democrats’ “faux outrage over this executive order is misplaced.”

“I’m confident my Republican colleagues will regret supporting this flawed national emergency when there is a Democrat in the White House,” she said before the vote.