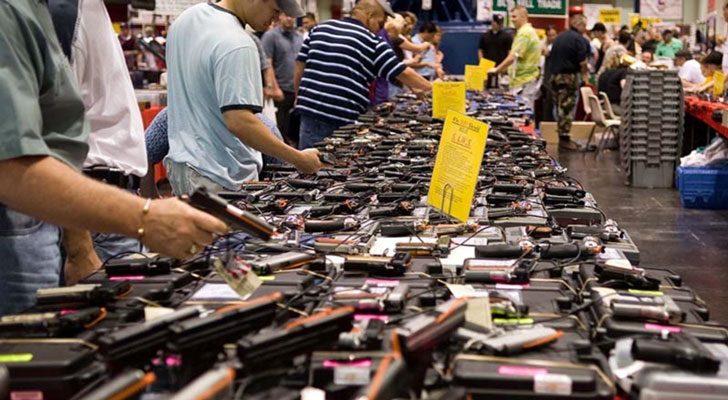 Photo By M&R Glasgow/Creative Commons: File photo from a gun show in Houston.

WASHINGTON – On Wednesday, Congressman Tom O’Halleran (AZ-01) voted to pass the Protecting Our Kids Act, a package that would raise the legal age of purchase for certain semi-automatic rifles, crack down on gun trafficking, establish safety requirements for storage, and ban bump stocks and high-capacity magazines as well as ghost guns. Today, he voted to pass the Federal Extreme Risk Protection Order Act, which implements a nationwide “red-flag” law, allowing courts to issue orders to temporarily remove access to firearms from people deemed to be a danger to themselves or others.

“I was commissioned as one of the youngest homicide detectives in the history of the Chicago PD and I was on the scene for two or three homicides every single week,” O’Halleran said. “I can’t begin to describe the things I saw, the things I still see when I close my eyes. I was one of the first people on the scene as innocent people lay dying. I was the person that went to a mother’s door to tell her that her child had been killed, the person that stayed in touch with a family as I investigated what had happened, (and) tried to bring closure.

“As a former officer who carried a gun and saw the harm these weapons can do, I stand firmly behind my vote on both commonsense packages that will protect our kids at school, our loved ones when they’re running errands, a congresswoman talking to constituents at a local supermarket. These measures make sense, they keep gun-owners rights intact, and they will make a real difference in the violence we see permeating our communities.”

“Today, we are announcing a commonsense, bipartisan proposal to protect America’s children, keep our schools safe, and reduce the threat of violence across our country. Families are scared, and it is our duty to come together and get something done that will help restore their sense of safety and security in their communities. Our plan increases needed mental health resources, improves school safety and support for students, and helps ensure dangerous criminals and those who are adjudicated as mentally ill can’t purchase weapons. Most importantly, our plan saves lives while also protecting the constitutional rights of law-abiding Americans. We look forward to earning broad, bipartisan support and passing our commonsense proposal into law.”

·       Provides resources to states and tribes to create and administer laws that help ensure deadly weapons are kept out of the hands of individuals whom a court has determined to be a significant danger to themselves or others, consistent with state and federal due process and constitutional protections.

·       National expansion of community behavioral health center model; major investments to increase access to mental health and suicide prevention programs; and other support services available in the community, including crisis and trauma intervention and recovery.

Protections for Victims of Domestic Violence

·       Convicted domestic violence abusers and individuals subject to domestic violence restraining orders are included in NICS, including those who have or have had a continuing relationship of a romantic or intimate nature.

·       Invests in programs to help institute safety measures in and around primary and secondary schools, support school violence prevention efforts, and provide training to school personnel and students.

·       Cracks down on criminals who illegally evade licensing requirements.

·       Invests in programs that increase access to mental and behavioral health services for youth and families in crisis via telehealth.

·       For buyers under 21 years of age, requires an investigative period to review juvenile and mental health records, including checks with state databases and local law enforcement.

·       Cracks down on criminals who illegally straw purchase and traffic guns.