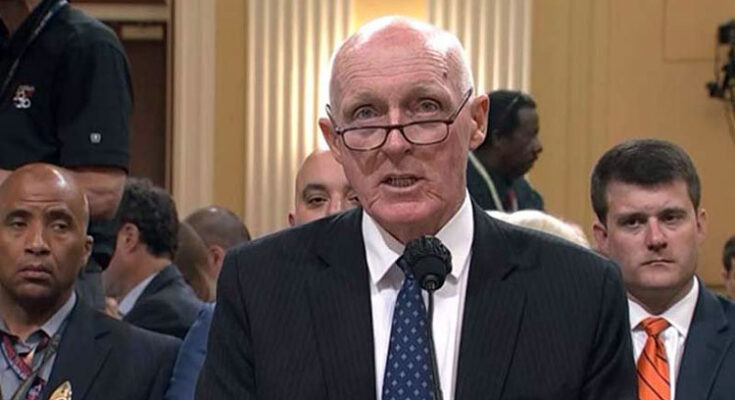 Photo Courtesy Select Committee on Jan. 6: Arizona House Speaker Rusty Bowers told the House Select Committee to Investigate the Jan. 6 Attack that he repeatedly rebuffed Trump campaign efforts to reverse the 2020 election. The Arizona Republican Party did not mention his testimony when it censured Bowers on Tuesday, but analysts have little doubt about what was behind the censure vote.

PHOENIX – The Arizona Republican Party formally censured House Speaker Rusty Bowers on Tuesday as “unfit to serve” the party, less than one month after he testified to the committee investigating the Jan. 6 Capitol attack.

The censure resolution makes no mention of that testimony, in which the Mesa Republican detailed former President Donald Trump’s efforts to overturn the 2020 election, what he called a “tragic parody” that would have forced him to violate his oath of office.

Instead, the two-page resolution cites a litany of issues where it said Bowers worked with Democrats on issues ranging from election reform to school funding to LGBTQ rights. As a result, the resolution said, Bowers has, “lost the confidence of a majority of Republican Party leaders” and it ended “any and all recognition and support of him as a member of” the party.

Despite the stated justifications, most analysts said they have little doubt about what was behind the censure.

“This is all part of a concentrated and coordinated effort to destabilize Bowers, particularly in retribution for speaking to the Jan. 6 committee,” said Paul Bentz, vice president of research at HighGround political consultants.

The vote comes just days before Trump and his former vice president, Mike Pence, are slated to appear at dueling rallies for competing GOP nominees for governor, further evidence of the widening rift within the state party.

“It’s the same thing you see nationwide,” said Barbara Norrander, a professor in the University of Arizona’s School of Government and Public Policy, about the divide among Arizona Republicans.

Requests for comment from party headquarters and from state party Chairwoman Kelli Ward were not immediately returned Wednesday. But in a tweet Tuesday, Ward said Bowers is “no longer a Republican in good standing and we call on Republicans to replace him at the ballot box in the August primary.”

State Sen. Paul Boyer, R-Glendale, who has often bucked the party in recent years, said the censure vote is “egregious and it’s ridiculous.” He said it is little more than the party looking for ways to “try and go after” Bowers, who does not deserve the hostility from his own party.

“If I was trying to destroy the Republican Party from the inside out, I would be doing exactly what Kelly Ward is doing,” he said.

Bowers is the latest in a line of notable Republicans to be censured by the party during Ward’s tenure after they showed opposition to Trump: Last year, the party censured Gov. Doug Ducey, former Sen. Jeff Flake, and Cindy McCain, the widow of the late Sen. John McCain, who was himself censured in 2014. Flake and Cindy McCain both endorsed Joe Biden’s presidential bid, and Ducey denounced Trump’s claim of election fraud in Arizona.

“I think her (Ward’s) sole focus is to appease the ego of one man,” Boyer said. “Her audience is an audience of one, and that is Donald Trump. That’s not what’s best for the state.”

Bowers made headlines with his June 21 testimony to the House Select Committee to Investigate the Jan. 6 Attack on the Capitol. He told the panel that Trump and his allies started pressuring him to overturn the results shortly after the election, and the pressure continued through Jan. 6.

Bowers said he kept demanding evidence of election fraud that Trump could not provide, and that interfering with the election without that evidence “is counter to my oath when I swore to the Constitution to uphold it.”

“I do not want to be a winner by cheating, I will not play with laws I swore allegiance to,” he said in his testimony.

Ducey and Pence are scheduled to rally for GOP gubernatorial candidate Karrin Taylor Robson on Friday, the same day that Trump will be in Arizona for Kari Lake, the Republican candidate for governor he has endorsed. Trump has endorsed several other Arizona Republicans, including David Farnsworth, who is running against Bowers for state Senate.

In his endorsement, Trump called Bowers a “weak and pathetic RINO who has blocked Election Integrity” and marshaled support for “wonderful man” Farnsworth who he said will be “totally free and fair” for elections.

Boyer said he expect the party to “do well in November, but not as well as we would have. I’m very worried about the future of the Republican Party long term because we can’t keep this up.”

While largely symbolic, analysts said the censure could hamper Bowers’ chances in the upcoming elections.

“The Arizona Republican Party is looking to further wade deeply into that primary between Bowers and David Farnsworth,” Bentz said. “This censure gives them additional permission – because now he’s not a Republican in good standing – to alleviate some of the criticisms against a Republican playing in primary elections.”