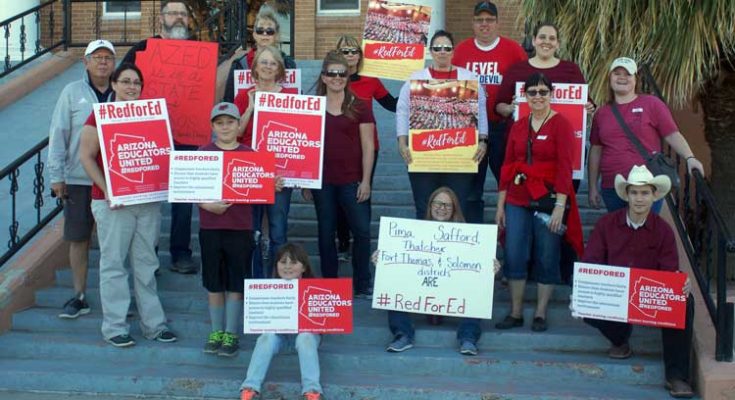 Jon Johnson File Photo/Gila Herald: Marchers line up at the Graham County Courthouse after a demonstration. Teachers are voting whether to strike.

PHOENIX – Arizona educators are voting whether to walk out of schools to protest low wages for teachers and support staff, with a decision expected by Friday.

Starting Tuesday, teachers were asked to vote on whether they will participate in a walkout “in support of Red for Ed demands.” Arizona Educators United, the group that conducted walk-ins Wednesday in a continuing series of protests, is gathering ballots through Thursday.

A walkout could shut down schools across the state. Mesa Public Schools Superintendent Michael Cowen said in an email to teachers that 64,000 students would be shut off of school until teachers return to their classrooms.

He said he appreciated the difficulty of the decision for teachers but warned a walkout could mean a “loss of public support.”

Cowen said school clubs and other activities would be among the services closed in the state’s largest district.

“I encourage you to weigh the pros and cons of the impact of a walkout on our students, parents, staff and the community,” he said, adding that the public has shown support over the years for Mesa schools. “We have never lost a bond or override election. We need to be mindful of that support as decisions are made.”

The voting comes less than a week after Gov. Doug Ducey proposed a plan that would increase teacher salaries by 20 percent by 2020.

The wage hike meets demands from Red for Ed advocates, but they said the governor’s plan falls short of providing money for support staff, including counselors and janitors. Education leaders said they’re also worried funds could dry up if the state’s economy does not perform as well as Ducey’s office predicts; Ducey is holding firm on his pledge of no tax increases. Some legislators, who would have to approve the plan, have called his predictions optimistic.

Ducey’s office did not respond Wednesday to requests for comment.

Save Our Schools Arizona, one of the grassroots organizations backing teachers, announced Wednesday it does not support the governor’s plan.

“Originally, we were really encouraged that the governor is really hearing teachers and parents,” said Dawn Penich-Thacker, a spokeswoman for SOS Arizona. “But it turns out, this is not a sustainable revenue source. The governor is relying exclusively on a booming economy.”

Ducey’s plan, she said, promises teachers nothing beyond words.

“This is not a sustainable and predictable way to invest in schools,” she said. “We’re worried that we can promise teachers a raise and promise schools they can buy new books and put air-conditioning on buses, and then next year if the economy slows down … then that money is going to disappear.”

A walkout could push back graduation for high school seniors, but some educators said the delay is a small price to pay in the long term.

“We either think short-term or we think long-term,” said Pamela Simon, a teacher at Bioscience High School in downtown Phoenix. “Short-term is we don’t want our kids to be pushed back on their graduation date. Long-term is we have already been living like this for a decade. How much longer are we going to wait and allow education to crumble in Arizona?”

The Arizona Red for Ed movement is part of a national outcry from teachers and education advocates about low salaries that has seen success in other parts of the country. In West Virginia, teachers went on strike for nine days before lawmakers gave them a 5 percent raise, and Oklahoma teachers were able to negotiate raises for both teachers and support staff after taking over the state Capitol for several days as part of their protest.

Wednesday morning, teachers across Arizona hosted the third walk-in demonstration in as many weeks. The before-school protests are designed to raise awareness and support for the issue among parents but not disrupt the school day.

Many at the walk-ins said they had either already voted to support a walkout or were strongly considering it.

“The (Ducey) administration has been not very consistent with their promises and their follow through. It just feels like we can’t believe what we’re hearing,” said Kevin Hayward, a music teacher at Camelback High School in central Phoenix. “He doesn’t necessarily have a plan to increase revenue to pay for teacher salaries, (but) the money’s got to come from somewhere. So who gets cut?”

Shaeauna Epps, a junior at Camelback High, said the cuts are felt in her classes.

Teachers said their demands were not coming from a selfish desire for more money but were a necessity to provide quality education for students. Josh Rosenbaum, a reading instructor at Camelback High, said he voted for the walkout because it was the only way to secure classroom funds.

“Our kids deserve more spending per pupil so we can improve their education, get them up to date on the most modern technologies,” he said, adding that Ducey’s proposal “didn’t address all of our needs. Many teachers aren’t here for the 20 percent raise. They’re here for the students.”

Tessa Ringo, whose two children attend Villa Montessori School in Phoenix, said her son, who uses a wheelchair, needs personalized resources to succeed in school. She worries qualified professionals won’t come to a school without an adequate salary.