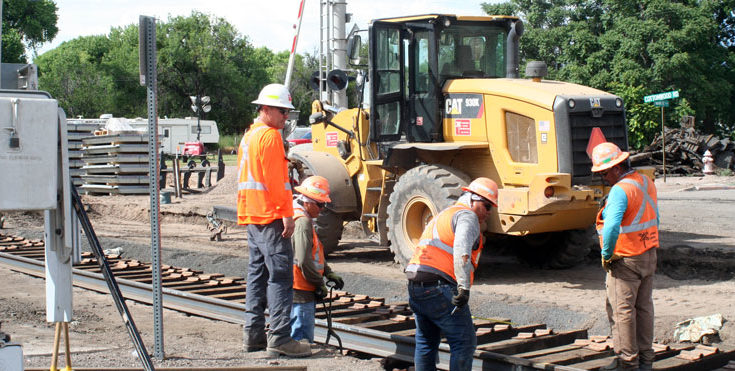 Walt Mares Photo/Gila Herald: An Arizona Eastern Railway crew works on completing the trackbed on which a new crossing will be installed. It will be much smoother for vehicles than the crossing that has existed there for many years. The crossing is at the intersection of State Route 78 and U.S. Highway 70. The work will be finished Tuesday and open to traffic on Wednesday.

DUNCAN- The train is not stopping here in Duncan. Neither is it going to Clifton. The reason? The Arizona Eastern Railway (AZER) is making a major improvement at a crossing in Duncan. The crossing is at the intersection of well-traveled State Route 78 and U.S. Highway 70.

Work on the intersection should be finished by Tuesday, Aug.16, and open to traffic the following day.

There are large orange and white barriers blocking the approach from 78 to 70. There is a small dirt road detour of about 50 yards. It has adequate signage indicating to motorists where to keep left or right.

The AZER crew working on the crossing began their efforts last Thursday when the crew started preparing the new rails that will be installed. Excavation and removal of the old rails began Friday. By Saturday, in hot weather, the crew had dug a trench at the crossing as it continued preparing the trackbed for the new rails to be installed. The trench was about three feet deep.

There were some occasional small but welcome relief from the heat when clouds moved in to block direct sunlight. However, the cloud covers did not last long.

Fortunately for the crew, the sporadic rain that has been hitting Greenlee was not falling in the Duncan area. Thus, the crew did not have to deal with mud, which would have undoubtedly made work far more difficult.

The new crossing in Duncan will be like those in Clifton, which used to be rough but are now smooth. The Duncan crossing has been rough with rails sticking up at least three to four inches above the railroad bed. That made for a bumpy crossing for motor vehicles, especially for cars with low clearance.

Completion of the new crossing in Duncan means AZER will resume its activity through Duncan and Clifton. The AZER line runs through Duncan into Clifton, 30 miles away. The train is vital to the copper mine in Morenci, four miles from Clifton. It carries a great many supplies to the mine and hauls away copper products.

The Morenci mine is the largest operating open-pit copper mine in North America. The Freeport McMoRan facility plays a most important role in the flourishing economies of Greenlee and neighboring Graham County via the large numbers of people it employs at the mine.

It is at the switching yard in Clifton that the AZER brings in the necessary equipment and other goods destined for the mine. It is at the yard that the ingoing goods are transferred to the FMI Railroad cars that climb a steep path to the Morenci mine. The FMI Railroad brings down goods that will be hauled away by the AZER.

The Arizona Eastern Railway also runs through Lordsburg, New Mexico, as it transports mine-produced products destined to be used elsewhere in the U.S. and abroad. China, for example, is the world’s greatest consumer of copper. Freeport McMoran is one of the world’s leading mining companies.

So, by Wednesday, the familiar sound of AZER locomotives blasting their horns at crossings will be again heard in Duncan and Clifton. That is except for the quiet zones in Clifton that AZER engineers always respect.

‘Decoration Day’ was the root of Memorial Day

One flown to Tucson hospital in crash in Black Hills