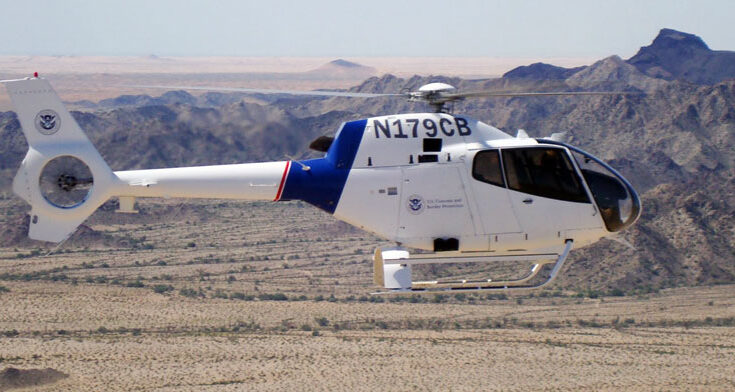 Contributed Photo/Courtesy U.S. Customs and Border Protection: The EC120 aircraft is a medium-range, turbine-powered helicopter used by Air and Marine Operations crews as a highly effective aerial surveillance platform in the order desert areas where terrain can be difficult to traverse on foot.

Last Tuesday, a Yuma Air Branch EC120 crew conducted an aerial patrol in the Mesquite Mountain region of Southwest Arizona. The pilot located a single male who appeared to be in distress, prompting a landing to assess the situation. An agent learned that the undocumented individual had been left behind by a group because he could not keep up, because of a foot injury.

Due to the rugged terrain, the crew requested assistance to transport the injured person from the mountaintop. A Yuma-based AS350 crew with an Air and Marine Emergency Medical Service (AMEMS)-qualified agent on board responded and delivered the man to the road where he was transferred into the custody of Ajo Station Border Patrol agents.

“Because of the intense heat and potential for dehydration, the challenging terrain, and the injuries the man sustained, the stranded man would not have survived without the rescue efforts of the Yuma Air Branch aircrews and our Tucson Sector Border Patrol partners,” said Supervisory Air and Marine Agent, Isidro Linares.

AMO safeguards our nation by anticipating and confronting security threats through aviation and maritime law enforcement expertise, innovative capabilities, and partnerships at the border and beyond. With approximately 1,800 federal agents and mission support personnel, 240 aircraft, and 300 marine vessels operating throughout the United States, Puerto Rico, and U.S. Virgin Islands, AMO serves as the nation’s experts in airborne and maritime law enforcement.

In Fiscal Year 2020, AMO enforcement actions resulted in the seizure or disruption of more than 194,000 pounds of cocaine, over 278,000 pounds of marijuana, nearly 16,000 pounds of methamphetamine, and almost 1,000 weapons. In addition, AMO seized $51.5 million in unreported currency as well as 1,066 arrests and nearly 48,000 apprehensions of undocumented migrants.