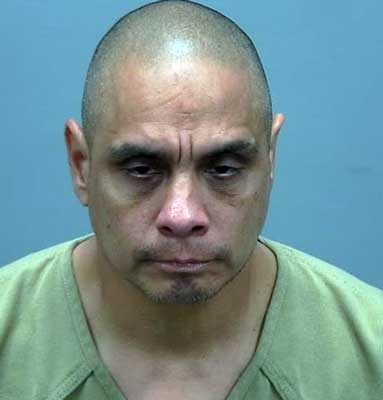 Contributed Photo/Courtesy GCSO: Rueben Rojas, 47, was arrested for three felony warrants after an anonymous tip led to his capture. Rojas was found in possession of heroin and meth when he was taken into custody.

SAFFORD – An anonymous tip led to the Sunday arrest of Rueben Rojas, 47, who was wanted for three felony warrants. At the time of his arrest, Rojas was found with 2.7 grams of heroin and a little bit of methamphetamine, according to a Safford Police report.

After receiving information that Rojas was at a local residence, officers responded to the residence and was greeted by an elderly male, who said he was the resident.

The man advised Rojas was inside and allowed officers to enter and follow him back to a bedroom. Rojas was located lying on a bed and was immediately taken into custody.

While searching Rojas, an officer located a “chunk” of black tar heroin in his pocket as well as a small plastic seal that contained a small amount of meth. The heroin was later weighed at 2.7 grams (worth about $260 on the street) and the meth and its baggie weighed a combined amount of .4 of a gram.

When Rojas was shown the drugs he allegedly said, “that’s not mine” and “I don’t know who that belongs to” despite the items being found in his pants pockets.

While en route to the Graham County Adult Detention Facility, the officer asked Rojas if he just used heroin or if he sold it too. At first, Rojas reportedly said he just used heroin but then he added that he “was just trying to make a little money to pay back my dad” for $15,000 in court fees lost for skipping court hearings.

Rojas was booked into the jail on his warrants and faces possible additional charges of possession of a narcotic drug, possession of a dangerous drug and possession of drug paraphernalia, pending review by the Graham County Attorney’s Office.