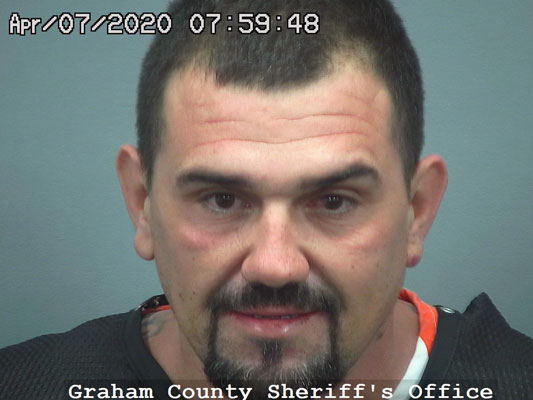 Contributed Photo/Courtesy GCSO: Steven Mabus was booked into the jail on drug charges and a warrant after being found with 20 grams of heroin.

SAFFORD – Steven Paul Mabus, 38, of Safford, was arrested and booked into the Graham County Adult Detention Facility on Tuesday, April 7, after authorities found him in possession of a significant quantity of heroin.

According to a Safford Police report, Mabus was found with roughly 20 grams of heroin in his pocket along with $813 in cash after being forcibly taken into custody.

Officers were initially dispatched at about 3:23 a.m. to a residence off 900 E. Hollywood Rd. regarding a family disturbance in a white trailer. The reporting party said a man and a woman were yelling at each other and two small children were crying outside. The caller then said the woman had left the residence, possibly on foot.

Upon arrival, officers noticed a cell phone lying on the gravel outside and noted that the trailer had security cameras on all sides. Officers reported hearing children crying inside and someone attempting to “hush” them when the officers knocked, however, nobody answered the door.

After advising that they would make a forcible entry if nobody responded, the officers used a breaching tool prybar and a sledgehammer to force the door open.

Upon doing so, Mabus allegedly began yelling at the officers but would not follow commands to exit the trailer and instead pulled the door shut. The officers opened the door again and, after Mabus refused commands and reportedly took “an aggressive stance”, an officer fired his TASER.

However, the TASER was not effective as Mabus broke the wires and engaged with the officer. The officer then took Mabus to the ground and applied a direct-contact stun from his TASER, which enabled him to handcuff the suspect along with assistance from other officers.

Mabus appeared to be intoxicated and continued to be belligerent to the officers. After learning of his warrant, Mabus was placed under arrest and searched. The search yielded the bag of heroin in his right front pocket and the cash was in plain view near where he had been. Mabus allegedly said the heroin was his and that he would take responsibility for it. He denied selling the drug, however, and said it was for his personal use and that he used approximately one gram every day. Despite his assertion, the weight of the heroin exceeded the threshold for a sale charge.

Two children – ages 1 and nearly 2 – were located on a bed in the trailer and appeared upset, according to the report. An officer also noticed a big-screen TV in the trailer with a variety of surveillance camera feeds showing multiple angles outside the trailer.

A short time later, a woman arrived at the trailer and said she lived there with Mabus and had gone to purchase cigarettes. The woman advised she was the mother of the two children and requested they be allowed to be released to Mabus’ mother.

The woman denied any argument between her and Mabus and said the children were screaming and crying because she was walking away from the trailer. She said Mabus works in Phoenix and that they had just moved into the location that same day. She also denied knowledge of any criminal activity and made a request to contact an attorney.

Mabus was then transported to the jail and booked on his charges. During which time he continued to threaten the officer and make lewd statements.