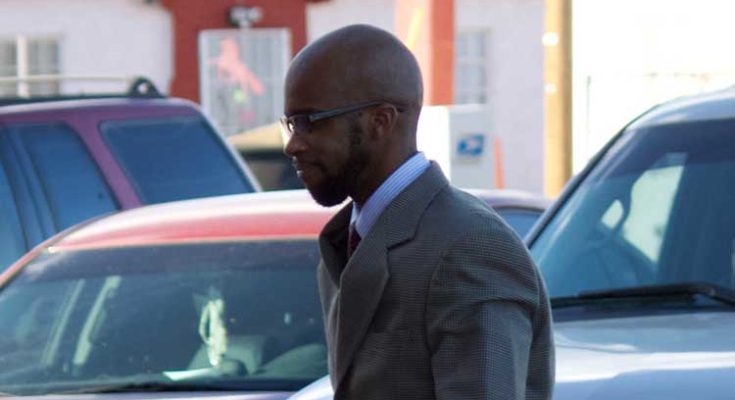 Jon Jonson Photo/Gila Herald: Salih Abdul-Haqq Zaid arrives at court early Thursday morning. Zaid took the stand in his own defense and claimed the shooting of Jared Garcia, 35, was justified.

SAFFORD – Accused murderer Salih Abdul-Haqq Zaid, 40, took the stand in his own defense Thursday and claimed the shooting of Jared Michael Garcia, 35, occurred while Zaid was being attacked by three men.

Zaid is accused of shooting Garcia to death outside of the Bull Pen bar at 912 W. Thatcher Blvd. with an AK-47 assault rifle loaded with a 30-round magazine in the early morning hours of April 26, 2017. Zaid is being held in custody on a $1 million bond and is charged with first-degree murder, aggravated assault with a deadly weapon, aggravated assault, endangerment, disorderly conduct with a weapon, and discharging a weapon within city limits.

In Zaid’s version of events, he decided to return to the Bull Pen bar to apologize to the bartender for his actions. For the jury to believe that course of events, however, one must consider the erratic way Zaid drove to his residence and back, failing to stop at stop signs and red lights and zipping through store parking lots, as the way he would normally drive to go and apologize to someone and not in a deep angered state of emotion on his way to confront those he deemed had done him wrong. That was how it played in the police interrogation video at least, where Zaid called the men bullies who were stupid if they thought someone at sometime wouldn’t stand up and take them out.

According to Zaid’s testimony, however, once he returned to the bar, Garcia forcibly threw him outside. He said Garcia and his two friends, Ryan Casillas and Joseph Rodriguez, then continued after him as he attempted to flee in his truck, grabbing on to him as he opened the door. Zaid said he instinctively grabbed his AK-47 assault rifle that just happened to be in his truck and loaded with a 30-round magazine and turned and shot his attacker, Garcia, out of self-defense. His testimony is in direct opposition to the prosecution’s version of events, in which he callously shot an unarmed person who had his arms raised and was running away from the gun.

According to the report from the Pima County Medical Examiner’s Office, there were no powder burns on Garcia, which indicated he was at least three feet or more away from Zaid when the fatal shot was fired, not directly upon him as Zaid contested. Also, the entry of the bullet does not appear to mesh with Zaid’s version of events either.

Upon cross-examination, Graham County Chief Deputy County Attorney L. Scott Bennett asked Zaid if he remembered telling the story differently to the police and if he remembered telling them “how do I really say it was self-defense when I went back to the bar” and “I’m a (expletive deleted) murderer.” Zaid said he didn’t remember saying those things that night because it was all a bit of a jumble.

However, according to Rodriguez and Casillas, Zaid re-entered the bar and then left with Rodriguez back into the parking lot, followed roughly 30 seconds later by Casillas and Garcia.

When all four men were in the parking lot, Zaid went to his truck and allegedly said, “Come here, I want to show you something.”

Garcia approached Zaid’s truck from the rear, and Rodriguez and Casillas said they saw Zaid shoulder a rifle and shoot Garcia as Garcia put his hands up in the air and turned to run. An autopsy report from the Pima County Medical Examiner’s office showed no powder burns on Garcia’s body and that he suffered a single gunshot wound that entered his left side and exited the right side of his torso.

Zaid’s defense attorney, Dennis McCarthy, spent less than a day-and-a-half on the defense before resting. Bennett will now have the prosecution’s rebuttal Friday morning, and the jury, which has been at it for two weeks, might get to hear closing arguments and jury instructions Friday as well. Then, it will be up to them on which version to believe really happened that fateful night.