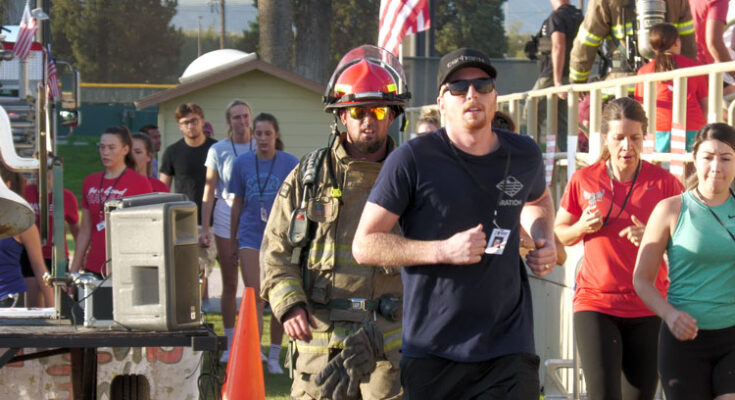 Jon Johnson Photo/Gila Herald: More than 400 people participated in the 5th annual 9/11 Memorial Stair Climb at EAC on Saturday on the 20th anniversary of the terrorist attacks.

THATCHER – On the 20th anniversary of the terrorist attacks on 9/11, Leah Meehl, a Thatcher Middle School art and girls P.E. teacher led the 5th annual 9/11 Memorial Stair Climb at EAC on Saturday to honor first responders and all who lost their lives on that fateful day.

Meehl first began the stair climb as a school activity for her students, who couldn’t participate in a similar event held at the UofA due to their age.

After having just her students the first year, students from Pima joined the next couple of years, and last year – since it was on a Friday – students were given extra credit to participate.

With around 400 signed up for the event, this year’s stair climb was the biggest to date. Meehl’s students create the artworks decorating John Mickelson Stadium at EAC, and pictures of the fallen first responders adorn the sides and top of the bleachers so those participating can look at them as they perform their laps of going up and down the stairs to reach 2,071 stairs, the amount that was in each World Trade Center Tower that first responders climbed.

“You worry that people won’t show up but I think people want to feel some sense of connection to these events and feel like in some way they’re honoring (those lost),” Meehl said. “Because many of the people here were alive and remember. Everybody knows where they were and what they were doing and it just feels like something that connects you.”

Local area first responders performed the climb, finishing 30 laps of the stadium in full firefighter turnouts and police attire. Some civilians also performed the entire 30 laps, but most did six laps and then a new set of roughly 50 people switched out roughly every 45 minutes, starting at about 6 a.m. Prior to each group’s start, Meehl spoke briefly about the event they were honoring.

The civilian attendees wore IDs of the fallen, and after they finished they signed their name on a large banner and rang the bell located on the field.

Thatcher firefighter Mike Nagy has participated in the event every year since its inception.

“It’s not easy,” Nagy said. “You try to put yourself in those guys’ boots. You can’t ever match the intensity. They never got to come home. You just look at the pictures and pay respect.”

“It’s not a firefighter thing; it’s not a cop thing,” Nagy said. “Civilians died that day too, so it’s about being an American. It should inspire you to be a better person and fight together and come together as a community. Bad things happen to us and it’s not about I it’s about we.”