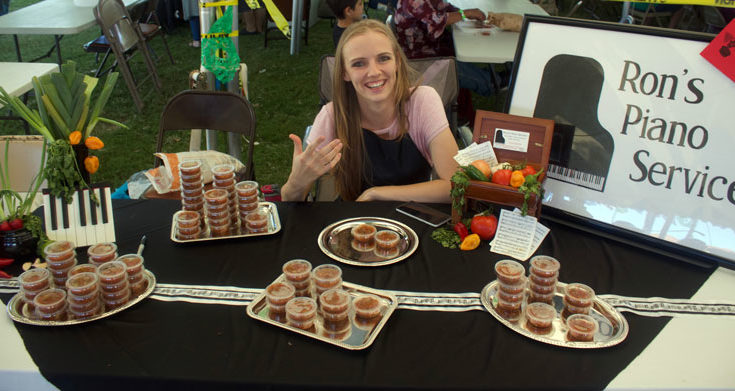 Jon Johnson Photo/Gila Herald: Tathra White presents her father’s salsa at the Ron’s Piano Service salsa table. The 12th annual SalsaFest had one of the biggest turnouts in the festival’s history.

SAFFORD – The sights, sounds, and smells of the 12th annual SalsaFest permeated Downtown Safford over the weekend as thousands of festival-goers turned out for the event.

“I think this is probably even bigger than last year,” said  Graham County Chamber of Commerce Executive Director Patrick O’Donnell. “We’ve got double the food vendors this year. Last night, (we) had the biggest crowd ever seen on a Friday night . . . I think it’s bigger and better than it has been. It just feels like its getting bigger.”

O’Donnell said the event was only possible due to all the volunteer effort from the Safford Lions Club and that it is a great family-friendly event.

Returning this year was the beer garden, championed by the Chamber of Commerce, and joining the frosty mugs of beer were two area wineries with their wares as well.

Graham County Chamber of Commerce Board Chairman Tim Linden of III Counties Distributing also praised all the sponsors for making the event happen.

“It’s a great community event,” Linden said. “We continue to grow it and make it better with better entertainment and more vendors. (It’s) more reason to come to Downtown Safford.

Linden had the pleasure of being one of the judges for the salsa contest this year and said he was amazed at how many good salsas were out there.

This year, the SalsaFest featured a new wrinkle for the Salsa Trail Challenge for the local restaurants and competitors were given three surprise ingredients that morning, kale, serrano chile peppers, and canned sweet kernel corn, and then had to use them in their entries. The restaurants brave enough to put forth the salsas were El Coronado, El Charro, and La Paloma, with La Paloma winning the competition.

The festival has grown from its humble beginnings and now encompasses nearly all of Downtown Safford, with vendors, musical acts, games, events, and more stretching down Main Street.

Chandler Efros, who played guitar and sang with Darryn Kamae, said he was impressed by the number of options at the festival.

“There was a lot of cool stuff going on this year,” Chandler Efros said.

Other musical acts this year featured regulars Mariachi Luz de Luna and Heart & Soul from Tucson, local group Boomtown, and the festival closed out with a concert by XS Band.

Throughout the Salsa Challenge, local acts such as the Gypsy Rose Dancers, Safford Dance Academy, and Extreme Martial Arts put on shows for the entertainment of the masses.

Down Main Street, a classic car show wowed the crowd and the artistic talents were on display in the sidewalk art competition. Codie Porter came away with honors for people’s choice, best overall, and most creative for her piece, “Pumpkin Descent.”

Back at the SalsaFest Stage, onlookers who made it through to the afternoon witnessed a close salsa-eating competition and an epic jalapeño pepper-eating contest that went into overtime.

Harvey Sauls, of Morenci, took home the honors for the salsa-eating contest by using a single chip as a spoon to scoop the salsa into his mouth.

Past chile pepper contest champion P.J. Ogas came out on top after initially tying twice with Harvey Lunt. Both men bravely devoured seven peppers in the first round and another five in the second round. Lunt, who told the Gila Herald he liked peppers and hot stuff on all of his food, had to come back to tie Ogas, and like Roberto Duran decided he had enough and said no mas to a third round.

Ogas, who had raised his hand either prematurely for victory or in prediction, was in tough shape as well. After swathing some peanut butter on his tongue to cool it down, he said he would have been down to continue.

Past repeat champion Ramie Loya was missing from this year’s competition, but he commented on the Gila Herald’s video of the event and told Ogas to enjoy his victory this year because he would be back to challenge him for the title next year.