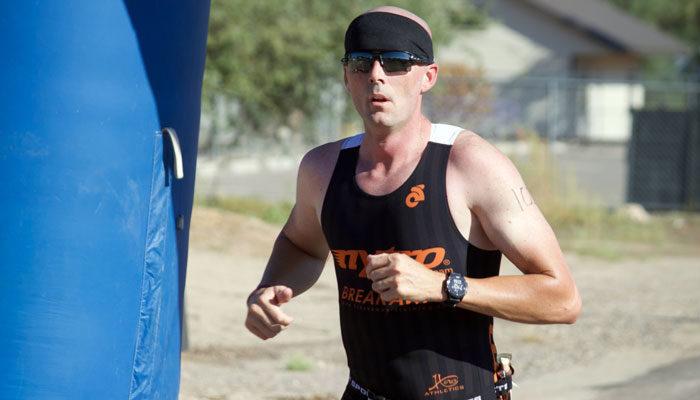 Nelson and Richardson finish 1,2 for the second year in a row

PIMA – A blustery morning and a last-second course change didn’t stop the 85 racers from competing and finishing the Sprint and/or Mini courses of the 10th annual Tri Community Tri in Pima on Saturday.

The race, which was begun by Cherla Ramsey, is now run by Brian and Angela Paull, who took up the mantle after Ramsey moved from the area. The Paulls said they took over the event because they loved it so much and didn’t want to see it end as well as it being a benefit to the community.

“We do it to help the community,” Angela said. “All the money we make from it is donated right back to our little community here. We do it because we want to help. If we don’t do it, who will?”

This year, racers ranged from 2-year-old Kasiah Balls – granddaughter to Pima racing regular Allison Stiles – to Larry Hanson and Gary Sorenson, who raced in the 60-69 age group. It was a family event for Stiles, who had her daughter, Jessica Balls, son-in-law, Todd Balls, and son, Jacob Stiles-Culver, all compete with her and Kasiah in the event.

Thirteen years and two seconds separated first- and second-place overall for the men. While the event brought racers from throughout southern Arizona, the top spot went to local Thatcher resident Eric Bingham, who edged out Dale Oldham, of Tucson, by two seconds. Bingham finished in 1:17:02, while Oldham – who was the fastest in the bike leg – was just behind in 1:17:04. Oldham told the Gila Herald he was happy with that result as he is Bingham’s senior by 13 years. Samuel Crandell finished in third place overall for the men in 1:18:45.

The third time racing in the event in a row was the charm for Bingham, who has competed in the annual sprint triathlon for a total of four different times, but Saturday was the first time he took home first-place honors.

“Last year, I took fourth and it was a goal this year to come back and win it, so that was my training all year,” Bingham said. “I focused on this race all year long.”

Oldham said he competed in the event last year and brought his children back with him this year to run the Mini.

On the women’s side, Melinda Nelson and Bonnie Richardson finished 1,2, respectively, for the second year in a row, with Stephanie Summers coming in third. Nelson finished in 1:20:23, and did so while being pregnant in her second trimester.

“It was a really fun race,” Nelson said. “The wind was rough this morning. When I looked outside and saw the trees blowing, I was a little nervous. Going out and up the hill (on the bike portion) was really challenging, but coming back it was really fun when the wind was at my back.”

Richardson had her cell phone fall during the bike portion and get smashed. She lost some time having to backtrack to retrieve the broken device but still squeaked managed to finish second in 1:25:50, while Summers got onto the podium at 1:26:31.

Despite losing her cell phone, Richardson said she enjoyed the event.

“It’s a great event,” she said. “I love that my kids can do it; I can do it. It’s a great family event and I love that you don’t have to travel to do it. And it’s really well put together. Angela does a great job.”

In the relay division, “The Procrastinators” team of Rebecca Johnson and Jessica Medlin edged out “Can’t Stop This” for first-place honors in a time of 1:31:06.

In the Mini, Carden Richardson finished first overall for the boys in 42:44, followed by Kevin Martin in 43:56 and Charles Richardson in 45:27, who just edged out fourth-place finisher Jackson Paull, who finished in 45:30.

Many of the out-of-town competitors commented on the course and how they appreciated the rural setting because they were not bothered or interrupted by the traffic congestion they see in events in bigger municipalities.

The course had to be changed at the last minute this year after organizers learned part of the bike route had recently been chip sealed. That caused racers to make a loop on the course – commonly done in longer-distance triathlons. The run course also had to be changed from the previous route.

“Last week, we had to redo all the courses and there were concerns people would get lost because they were looking forward to the course we did last year,” Angela said. “But everyone did well. They enjoyed it and it was a success.”

Even though more attendees could mean more competition for her title, Nelson encouraged those who enjoy swimming, biking, and running to participate in the event next year.

“I think that a lot more people need to sign up and try it out,” Nelson said. “It’s a lot of fun, and I think it’s great for the community.”

As usual, the event was timed by CEP Timing and all the race results can be found on its website by clicking here.

A photo album of the event can also be seen by clicking here.