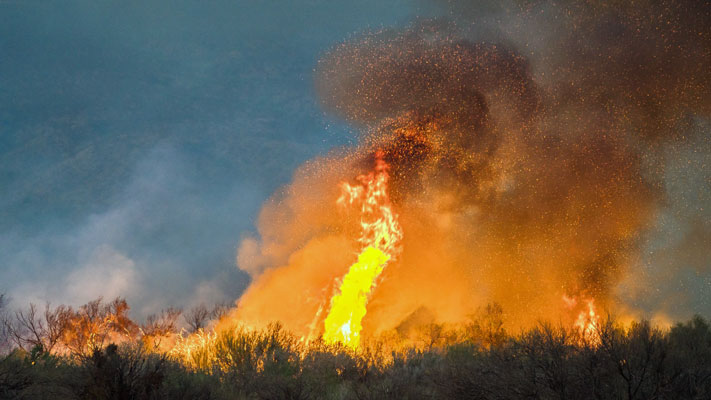 Photo Courtesy Lori Grace Bailey: The Salt Fire burns outside of Fort Thomas on Friday night. A reward of up to $10,000 has been offered for information leading to the arrest of the person(s) responsible for starting the wildfire that has burned about 4,000 acres as of Sunday.

BYLAS – The San Carlos Apache Forest Resources Program has posted a reward of up to $10,000 for information leading to the arrest of the person(s) responsible for setting the Salt Fire in Bylas on Thursday.

According to the post, authorities believe the fire was intentionally set somewhere east of the Bylas rodeo grounds.

The windswept blaze burned more than 2,200 acres the first day as it made its way east toward Fort Thomas while burning along the Gila Riverbed.

When the fire first started, homes were threatened and residents were evacuated. After its initial lurch, the fire was mainly kept to the Gila Riverbed outside of Fort Thomas and didn’t move much from Friday night to Sunday.

Photographer Lori Grace Bailey caught these images Friday all within a couple of hours while about three miles northwest of Fort Thomas.

The fire was listed as being 35 percent containment and having burned about 4,000 acres as of Sunday. The cause is under investigation, but it is believed to be arson.

Anyone with information regarding the suspect(s) involved in starting the Salt Fire is asked to call WeTip at 1-800-472-7766. The tip line is anonymous.