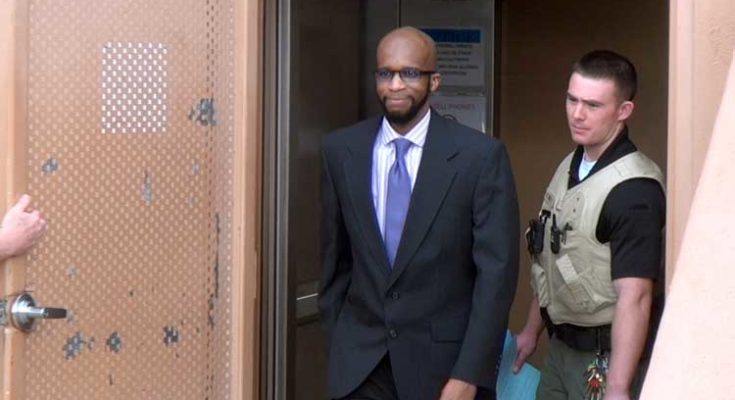 Jon Johnson Photo/Gila Herald: A confident-looking Salih Abdul-Haqq Zaid leaves the Graham County Courthouse on Friday night after closing arguments were heard. The case is now in the jury’s hands.

SAFFORD – The evidence has been seen, nearly two weeks of testimony heard, and the prosecution and defense have had their final say; now the fate of Salih Abdul-Haqq Zaid, 40, lies with the jury.

The jury was whittled down to 12 Friday, selecting four alternates from its 16-member pool after final jury instructions and closing arguments were heard. A panel of nine women and three men were set to begin deliberations Monday morning in an attempt to reach a verdict.

Zaid is charged with first-degree murder, two counts of aggravated assault, endangerment, disorderly conduct with a weapon, and unlawful discharge of a weapon within city limits. The charges are related to the early morning April 26, 2017, shooting death of Jared Michael Garcia, 35, who had previously accosted Zaid in the Bull Pen bar at 912 W. Thatcher Blvd. Garcia was shot with an AK-47 assault rifle from near point-blank range (approximately 3 feet) while engaging Zaid in the parking lot after Zaid had returned to the bar after being removed due to the previous altercation.

In his closing argument, Zaid’s defense attorney, Dennis McCarthy, said the prosecution’s witnesses were all drinking buddies who were drunk and were not credible. He said the witnesses were “making stuff up” to paint his client in a bad light.

Part of McCarthy’s key points were that his client keeps his gun in his truck all the time, and that he was the victim of assault that night and was merely returning to the bar to apologize to the bartender when he was once again accosted and was forced to use deadly force to defend himself against his attackers.

When he was finished, McCarthy told the jury that if they had any reasonable doubt they had to find his client not guilty.

“If you think there’s a real possibility he is innocent you must find him not guilty,” McCarthy said.

He added that if he is innocent of the murder charge, all other charges should be exonerated as well because they are all justified for the same reason.

Graham County Chief Deputy County Attorney L. Scott Bennett countered the argument by saying Zaid’s version of events did not match with surveillance footage of him driving back to his residence – where the prosecution alleges he retrieved his AK-47 and ammunition – and with that of footage from the parking lot camera of the Bull Pen. Additionally, Bennett produced Zaid’s shirt he was wearing the night of the incident and showed that it was fully intact with no signs of having been in a struggle.

Perhaps most detrimental to Zaid’s defense is his own words to officers that night, in which he described the group of three men as “bullies” and how he handles bullies.

“There is no way you are going to bully me,” Zaid said in the police interrogation video. “I can’t sleep at night if I let somebody bully me.

I’m a (expletive deleted) murderer. The murderer from Tennessee, that’s who I am . . . I wouldn’t even say it was self-defense because I went back to the bar.”

Bennett finished up his summation by asking the jury to find Zaid guilty of first-degree murder.

The jury is set to begin deliberations shortly after 9 a.m. Monday morning.