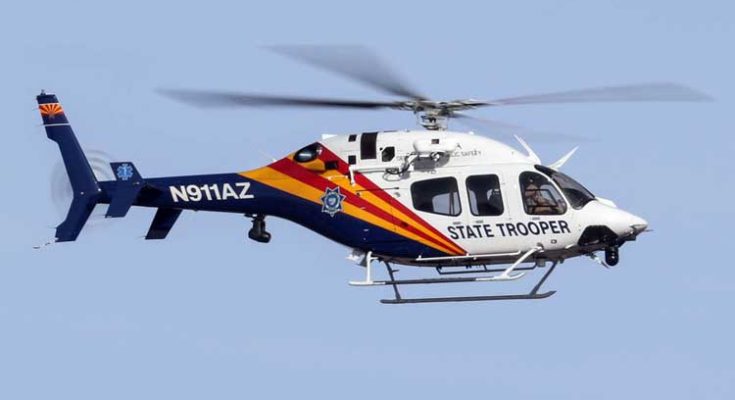 A 14-year-old boy was rescued by a DPS Ranger helicopter like this one after falling off a 40-foot cliff and breaking his leg.

POINT OF PINES – A 14-year-old boy was rescued by a DPS Ranger helicopter after falling from a 40-foot cliff Feb. 18 in the Point of Pines area.

According to a Graham County Sheriff’s Office report, the boy was with his father and other family members hiking in the area looking for deer antlers. The group was standing alongside the edge of the mountain looking through binoculars when the boy lost his footing and slid down an embankment and then fell roughly 40 feet off a cliff.

The family made their way down to the boy and discovered his leg and finger were broken. Game officials with San Carlos made their way to the injured boy, but they reported they didn’t have any way to remove him.

The Graham County Search and Rescue team was mobilized as well as a ropes team from Thatcher. The SAR leader also requested assistance from the Department of Public Safety, which sent a helicopter to the area from Flagstaff.

With the site being so far away from Safford, it took Graham County rescue members about 1.5 hours to make it there. Upon arrival, a DPS Ranger had begun the rescue operation and successfully airlifted the boy out of the wilderness to where medical personnel could reach him. The boy was then flown from the scene by LifeNet to receive further medical attention.