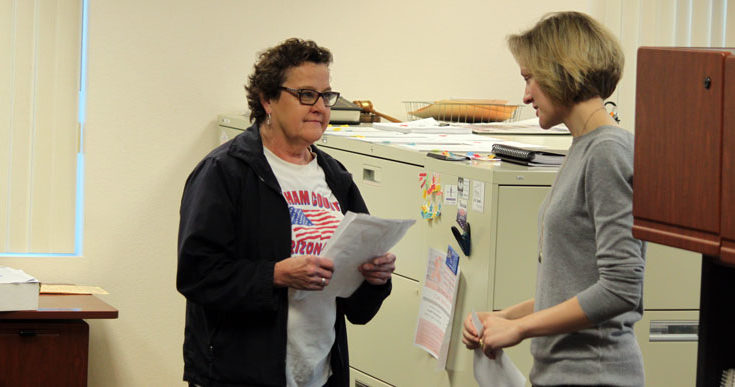 SAFFORD – Early Monday morning, Darlee Maylen, Chairman of The Committee for the Recall of Cindy Woodman as Graham County Clerk of Superior Court, dropped off 3,147 recall signatures to Graham County Election Director Hannah Duderstadt. Once the signatures are verified through the Graham County Recorder’s Office, Woodman will be given the option to resign or to fight the recall effort.

Maylen said she was nervous yet excited about delivering the signatures. She thanked all those who helped make the recall a success to this point.

“We had a strong committee and had really good supporters,” she said. “The public really reached out to us to sign these petitions and we felt really good about that.”

If Woodman refuses to resign her position, she will have to run for re-election in the next consolidated election – as long as there is an opponent to run against her – which could be as early as May 19 with the Clerk’s position being the only question on the ballot or could end up being during the primary Aug. 4.

The recall effort began in September and gathered 450 more signatures than necessary with roughly a month-and-half in time to spare. The group had until Jan. 1, 2020, to gather 2,697 signatures, which is 25 percent of the total votes cast for both candidates in the 2018 election.

“This has not been the easiest thing for a lot of us to do,” Maylen said. “It’s been emotional. It’s been hard. I just appreciate the support we have gotten because this isn’t the best issue to address to the public. But we have a strong committee that felt really good about it and what we were doing.”

The order came at the behest of Judge Peterson – a fellow Republican – who wrote a scathing letter to Justice Brutinel which outlined several aspects of Woodman’s ineptitude for the job, including creating a hostile workplace (including slapping a deputy clerk on her posterior), code of conduct violations, conflict with staff resulting in the resignation of seven of eight deputy clerks who were there prior to Woodman taking office in January 2018 and two more who were hired afterward, failure to accept payments for probation, failure to provide appropriate cross-training for deputy clerks, mishandling of evidence in the Manuel Campos felony case, failure to provide courtroom clerks for duty, incomplete filing, unreasonable delays in minute entries, harassment of excused juror Tom Green, and diverting the judge’s time.

Since then, Woodman has not been back at the office in any capacity and her duties were given to a new chosen “lead clerk”. Maylen said the recall effort kicked into high gear once the Supreme Court’s order was issued because the taxpayers were essentially still paying Woodman for not doing any work.

“With the Supreme Court order that she be banned from the building, why should we the taxpayers be paying for a person who can’t even be allowed into the courthouse,” Maylen asked.

The Gila Herald attempted to contact Woodman for comment but her cell phone mailbox was full and could not accept any new messages and the number we have listed for her home phone is disconnected.