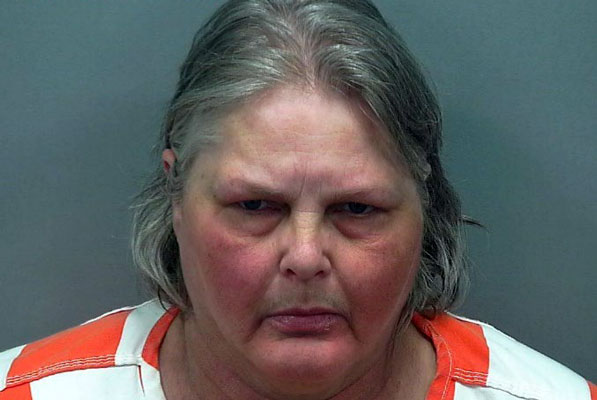 Contributed Photo/Courtesy GCSO: Cheryl McCaffery, 54, was jailed for assault and disorderly conduct after allegedly attacking her stepson when he returned her car later than she believed he would.

SAFFORD – A woman who reported her car stolen was jailed for assault after allegedly repeatedly punching her stepson when he returned the vehicle.

Cheryl McCaffery, 54, was arrested and booked into the Graham County Adult Detention Facility on charges of disorderly conduct, and assault – both with the domestic violence distinction.

Her stepson, Steven Wayne Marsh Jr., 31, was arrested on a misdemeanor warrant for criminal damage and disorderly conduct/domestic violence, from a complaint that was issued in December 2020.

According to Safford Police reports, at about 1:06 p.m. On March 1, McCaffery reported her car stolen by Marsh. Shortly after doing so, McCaffery called the police back and advised that Marsh was on his way back to their residence in the 900 block of E. Hollywood Road in Sunrise Village Mobile Home & RV Park.

An officer arrived at the residence and made contact with McCaffery and noted she was “extremly animated”. While speaking with her, Marsh reportedly drove up in the car.

According to the reports, Marsh advised he had asked for and received permission from McCaffery to borrow her car to run some errands and had it for no more than an hour. He advised that he did not wish to pursue charges against McCaffery since she was his step-mother.

McCaffery told another officer that Marsh and his sister had taken the car without permission to go get drugs and that they are “a bunch of dopers (who) use people.” She said she called them at 12:45 p.m. after they had already had the car for more than an hour and told them to bring it back. She didn’t think it seemed like Marsh was going to comply, so she reported the car stolen. Later on during her interview, McCaffery allegedly advised she was upset that Marsh had taken longer with her car than he was supposed to. When the officer asked if she had given Marsh permission to use the vehicle, McCaffery allegedly replied “what if I did? Does that change anything?”

McCaffery then allegedly advised that she had indeed given Marsh permission to use the car but he was only supposed to have it for 20 minutes and she became irate when he hadn’t returned it on time. She was then taken to jail and booked for disorderly conduct and assault.

A records check on Marsh showed he had an active warrant and he was taken to jail and booked as well but is not facing any new charges relating to the incident.