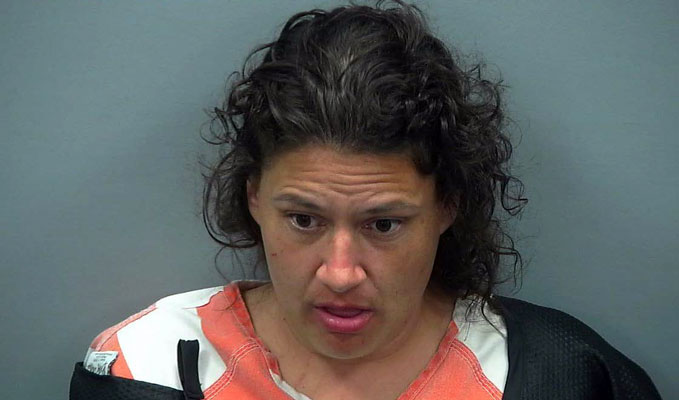 Contributed Photo/Courtesy GCSO: Jennifer Tarlton was arrested and booked into jail on charges of disorderly conduct and indecent exposure.

SAFFORD – A woman was charged with indecent exposure and disorderly conduct after getting into a fight with another patron at the Little Caesars restaurant at 1547 U.S. Highway 70 on Saturday, Jan. 23.

Jennifer Nicole Marie Tarlton, 35, of Thatcher, was arrested and booked into the Graham County Adult Detention Facility. On Jan. Tuesday, Jan. 26, she made an initial not guilty plea to charges of disorderly conduct/fighting and indecent exposure.

According to witnesses of the incident, Tarlton allegedly entered the Little Caesars restaurant and was acting oddly while cursing. A female patron told Tarlton that she needed to calm down, which resulted in Tarlton allegedly striking the woman, according to a Safford Police report.

The women then continued to fight in the store, rolling on the ground, and then outside as well. During the fight, Tarlton’s shirt was torn, exposing her breasts. Witnesses advised Tarlton declined to hold her town shirt up to cover herself.

The woman who was fighting Tarlton left the scene. An officer learned her name but was advised that the woman was on probation and did not want police contact.

After the fight, Tarlton ran across the street to Jerry’s Restaurant at 1612 W. Thatcher Blvd. A witness there said Tarlton came in with her breasts exposed. The witness said Tarlton was out of breath and asked for some water. While an employee was getting her water, Tarlton’s shirt reportedly fell in even more disarray, exposing herself to several patrons at the restaurant. The witness advised that Tarlton didn’t seem to care much about being exposed in that fashion.

After contacting Tarlton in the restroom, officers arrested her and held up her shirt while escorting her to the police vehicle. Once inside, her shirt came completely off, according to an SPD report. Both Little Caesars and Jerry’s Restaurants requested Tarlton be trespassed from their businesses.

Tarlton was then transported to jail and booked on the above-listed charges.