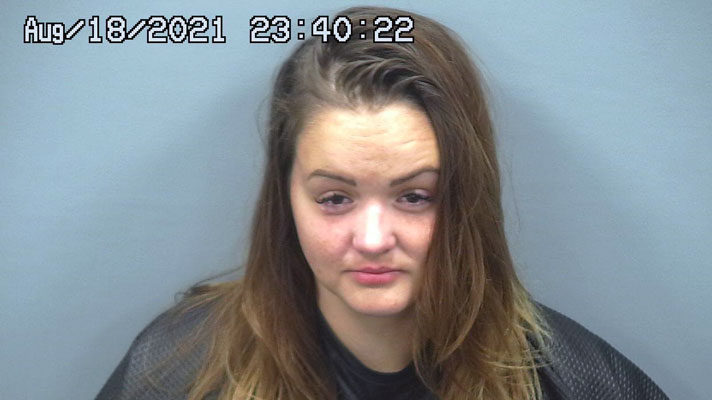 SAFFORD – In the majority of domestic violence situations, the male is usually found at fault and taken to jail. Sometimes, however, a woman is believed to be the aggressor.

Such was reportedly the case the evening of Aug. 18, when officers responded to a call for service at The Church of Jesus Christ of Latter-day Saints Chapel in the 300 block of 20th Street.

According to a Safford Police report, officers believe Shandy Amanda Nielson to be the aggressor in a domestic violence incident and her husband was the victim.

Upon arrival at the church, officers located a man in a black Cadillac Escalade with a windshield that was severely damaged. The man advised that upon his return home from work that day, he got into an argument with his wife, Nielson. He said he then began to pack a bag to leave but Nielson didn’t want him to go so she physically attacked him and even tried putting him in a headlock, which caused his earring to come out of the ear. The man showed the officer scratches to his neck and chest area as proof of the assault.

The man also advised that Nielson had smashed the windshield of the Escalade.

An officer then went to Nielson’s residence off 20th Street and spoke with Nielson, who said she thought her husband had been with friends all day and not at work. She said her husband received his injuries when she attempted to defend herself from him.

When asked if her husband was trying to leave, Nielson allegedly replied that he was. She also allegedly admitted to smashing the windshield by throwing an impact drill into it as the victim was getting ready to leave.

Nielson was holding her 8-month-old baby while being interrogated and when she learned she was going to be arrested allegedly advised that her baby’s only source of nourishment was her breastmilk and that the baby doesn’t take a bottle and she didn’t have any frozen breast milk stored either.

The victim advised that the baby drinks almond milk from a bottle and has started to eat solid foods.

Nielson was then arrested and booked into the Graham County Adult Detention Facility on charges of assault, disorderly conduct, and criminal damage. The baby was left in the care of its father.

On Aug. 19, a criminal complaint with the same charges listed was filed and Nielson appeared in Safford Municipal Court on Aug. 24 and entered a plea of not guilty.