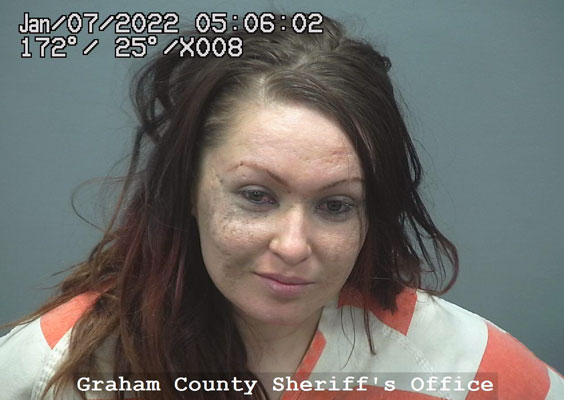 Contributed Photo/Courtesy GCSO: Stephanie Owens was booked into jail on charges of DUI, criminal damage, and leaving the scene of an accident.

GRAHAM COUNTY – A night out on the town ended poorly for a woman who police say struck numerous objects while driving intoxicated before ended up crashing into a brick wall.

Stephanie Owens, 28, was arrested on Jan. 7 and booked into the Graham County Detention Facility on charges of DUI, criminal damage, and leaving the scene of an accident.

According to a Sheriff’s Office police report, deputies were initially dispatched at about 12:08 a.m. to the Stadium Club bar at 3649 W. 8th Street regarding a woman who was being disorderly toward security guards.

Upon arrival, the woman, later identified as Owens, had already left the scene in a white SUV heading northbound on Arena Way. Witnesses advised that they heard a loud sound and believed Owens had wrecked.

The deputy attempted to locate the SUV and followed a trail of trash that had been dislodged from a struck trash can. The trail led to Reay Lane, where the deputy saw another displaced trash can. A number of street signs were also apparently struck by the SUV.

Further down the road to the south, the deputy located a white SUV that crashed into a brick wall. The deputy approached and located Owens behind the wheel with a strong odor of alcohol emitting from her. Two front airbags deployed in the crash and brinks from the wall were found in the back seat of the vehicle.

After not seeing any obvious injury, the deputy placed Owens under arrest and transported her to the Mount Graham Regional Medical Center. After she was cleared from the hospital, Owens was booked into jail.