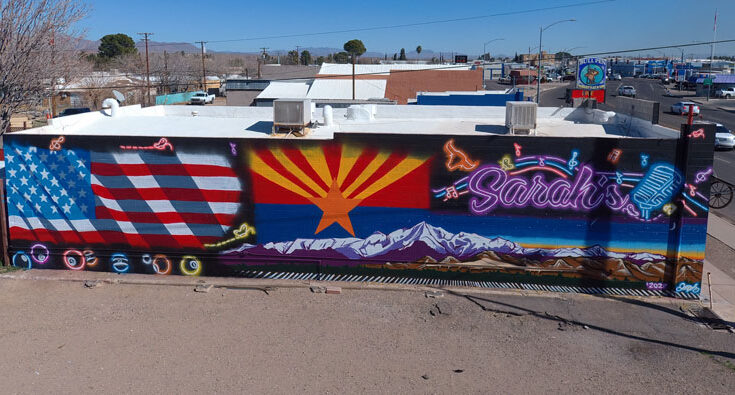 Jon Johnson File Photo/Gila Herald: An intoxicated woman attempting to cross U.S. Highway 70 near Sarah’s Bull Pen was given a citation for jaywalking after allegedly jumping into a moving vehicle.

SAFFORD – An allegedly intoxicated woman was given a citation for jaywalking on Aug. 20 after reportedly jumping into a vehicle as it traveled along U.S. Highway 70.

According to a Safford Police report, an officer was on patrol at about 10:46 p.m. when he noticed a vehicle stopped in the median of U.S. Highway 70 near Sarah’s Bull Pen and that there was a woman at the passenger side yelling at the driver.

Upon initial contact, a group of individuals advised that the woman had been struck by the vehicle while attempting to cross the road. There are no crosswalks in that area or streets that traverse the highway and continue southbound.

The driver of the vehicle told the officer that he was westbound and was passing the Bull Pen when the woman jumped into his vehicle.

The woman, identified as Jennifer Diaz, was “extremely intoxicated and was acting belligerent”, according to the officer’s report. Diaz, who had to be instructed several times to go to the sidewalk, suffered only a small abrasion to her elbow and denied medical assistance.

Three witnesses corroborated the driver’s series of events and said they saw the vehicle traveling in the far right lane and told Diaz to “watch out.” Instead, however, they said Diaz lunged into the vehicle as it slowly passed, striking the side.

The officer noted that there is a four-way intersection one block from the collision area at 8th Avenue and U.S. Highway 70 that has designated crosswalks. Due to the nearby location of a crosswalk and witness statements, the officer deemed Diaz to be at fault and issued her a civil citation for jaywalking.