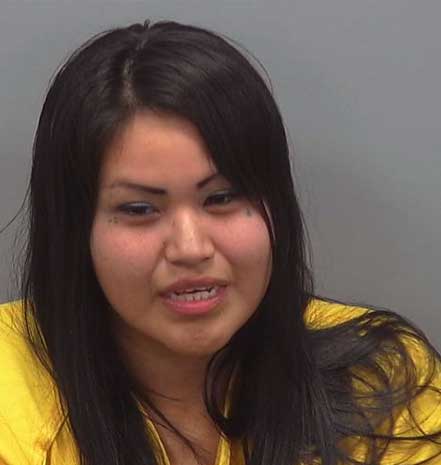 SAFFORD – Eva Elgo, 26, was arrested and booked into the Graham County Adult Detention Facility on two counts of child abuse after abandoning her two children, ages 1 and 2, in the care of an intoxicated homeless couple. The children were later located in Bylas and were placed into the care of the Department of Children Services.

Authorities were initially dispatched at about 7:15 p.m. on Thursday, Jan. 25, to the Motel 6 at 1578 W. Thatcher Blvd. regarding a welfare check. Upon arrival, an officer located Elgo, who appeared to be intoxicated.

Elgo said she had left the Mt. Graham Safe House earlier in the day with her two children and had met up with a homeless couple to consume alcohol with them in their tent in the desert north of the Bull Pen bar. She claimed that when she went to leave, the homeless couple wouldn’t give her children back because they said she was “too drunk.” The Department of Children Services was notified of the situation and authorities began to attempt to locate the missing children.

Through their investigation, officers located an empty stroller behind McDonald’s and an intoxicated homeless man who advised he and another woman had been drinking with Elgo earlier in the day.

The homeless man said after drinking all day they asked Elgo if they could go to McDonald’s to get some food for her children but on the way to the restaurant Elgo disappeared. The man said he left the children with his tent mate at McDonald’s while he walked back to camp in search of Elgo.

At about 8 p.m., Graham County Dispatch informed authorities that the San Carlos Police Department (SCPD) had received an anonymous call from a woman who said she had two children who had been abandoned by their mother in Safford and that she was on her way to Bylas to meet with an officer. A few minutes later, SCPD advised Dispatch that the homeless woman and Elgo’s two children had been located in Bylas. A member of the Safford Police Department then traveled to Bylas and interviewed two women who were with the children.

The homeless woman said she met another woman at McDonald’s who offered to give her and the children a ride to Bylas. The woman said she took the children to Bylas to get them into the reservation’s Department of Children Services system and that they had called the police on their way.

Elgo was advised her children were safe and was then placed under arrest for two counts of child abuse and was booked into the jail.