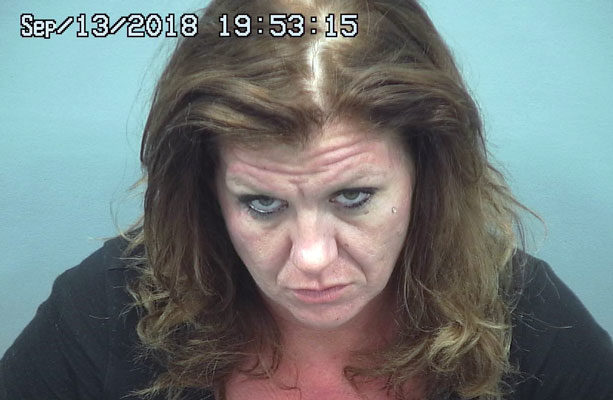 Contributed Photo/Courtesy GCSO: Nicole Bencomo was arrested for a parole violation and was found in possession of heroin and drug paraphernalia.

SAFFORD – Nicole Bencomo, 35, was arrested Sept. 13 for a parole warrant and was booked into the Graham County Adult Detention Facility.

During her arrest, Bencomo first identified herself under her sister’s maiden name, and then later was found in possession of .10 of a gram of black tar heroin. Charges regarding possession of a narcotic drug and possession of drug paraphernalia are pending.

According to a Safford Police report, an officer noticed a vehicle leaving a known drug area in the 400 block of 9th Street and later initiated a traffic stop on the vehicle at about 4:30 p.m. for not coming to a complete stop at the intersection of 9th Street and 1st Avenue. The officer also noted the vehicle’s insurance was suspended.

Bencomo was a passenger in the vehicle, and, after initially giving her maiden name, informed the officer that she had just gotten out of prison and off parole and that she shouldn’t have any warrants. She was incorrect.

The officer rechecked through Graham County Dispatch, which showed an active Arizona Department of Corrections warrant. The officer then arrested Bencomo and discovered the heroin and a piece of aluminum foil with apparent drug residue streaks.

Bencomo allegedly said she had recently relapsed into heroin and that she didn’t pay for the small amount she had but that it was given to her in lieu of money that she was owed.

Bencomo was then taken to the jail while the driver chose to leave the vehicle at the Circle K where he had been pulled over until he fixed his insurance suspension.