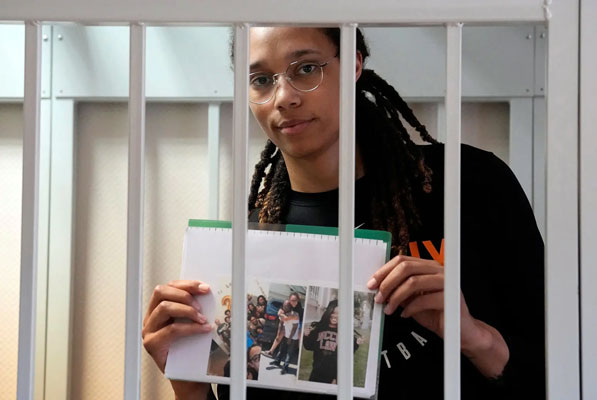 Alexander Zemlianichenko Photo/Pool via REUTER: Brittney Griner has been released from a Russian penal colony in a prisoner exchange with the United States.

WASHINGTON – Phoenix Mercury All-Star and two-time Olympic gold medalist Brittney Griner was freed from a Russian penal colony on Thursday when the United States performed a prisoner exchange for Viktor Bout, a Russian arms dealer known as “the merchant of death” who was serving a 25-year prison sentence in the U.S.

On Thursday morning, President Joe Biden tweeted, “Moments ago I spoke to Brittney Griner. She is safe. She is on a plane. She is on her way home.”

He then spoke in an address and said, “After months of being unjustly detained in Russia, held under intolerable circumstances, Brittney will soon be back in the arms of her loved one and she should have been there all along. This is a day we’ve worked toward for a long time. We never stopped pushing for her release.”

Russia receives back Bout, who was convicted in 2011 on four counts relating to the sale of antiaircraft weapons to drug enforcement informants who were posing as arms buyers for the Revolutionary Armed Forces of Columbia.

During his address, President Biden thanked the public servants who “worked tirelessly” to secure her release. Biden also thanked the United Arab Emirates (UAE), who assisted and where Griner’s plane landed after debarking from Russia.

“This unjust detention is over and Brittney Griner is coming home. I’m so happy for her wife, Cherelle, and their whole family. Thank you to everyone who advocated for Brittney’s release and to the State Department and White House who worked so hard to make this happen,” said Kelly who serves on the Senate Armed Services Committee.

Since Griner’s detainment nine months ago, Kelly stayed in touch with Griner’s wife, Cherelle, was frequently briefed on Griner’s situation by the State Department, and continued to push the Biden administration to advance efforts to secure Griner’s timely release. This week, Kelly again reiterated his calls for Griner’s safe and swift return with President Biden during their visit to Arizona.

Griner has been incarcerated in Russia since February when customs officials at Moscow’s Sheremetyevo Airport found two vape cartridges containing cannabis oil commonly sold in Arizona and other states with medical and recreational marijuana.

Griner pleaded guilty in July and said while she did possess the cartridges she had no criminal intent and merely forgot they were in her luggage while she raced to the airport. Griner also produced a letter from her doctor showing she was recommended to use medical cannabis for chronic pain.

On Aug. 4, she was sentenced to nine years in prison and was subsequently transferred to a penal colony.

“I’m glad to be able to say Brittney is in good spirits,” President Biden said Thursday morning. “She’s relieved to finally be heading home and the fact remains that she’s lost months of her life, experienced a needless trauma. She deserves space, privacy, and time with her loved ones to recover and heal from her time being wrongfully detained,” President Biden said.

President Biden said the U.S. is still trying to bring home retired U.S. Marine Paul Whelan, who was working as a corporate security executive when he was arrested at a Moscow hotel in December 2018. He was later convicted in June 2020 on espionage charges. Russia claims Whelan was working as a spy, which the U.S. denies. Officials said Russia refused to include Whelan as part of the agreement and instead preferred a one-for-one swap like the administrations did earlier this year when the U.S. exchanged Russian pilot Konstantin Yaroshenko for U.S. Marine Trevor Reed, who was being held in Russia on assault charges.

“Sadly, for totally illegitimate reasons, Russia has treated Paul’s case differently than Brittney’s,” Biden said. “And while we have not yet succeeded in securing Paul’s release, we are not giving up. We will never give up.”