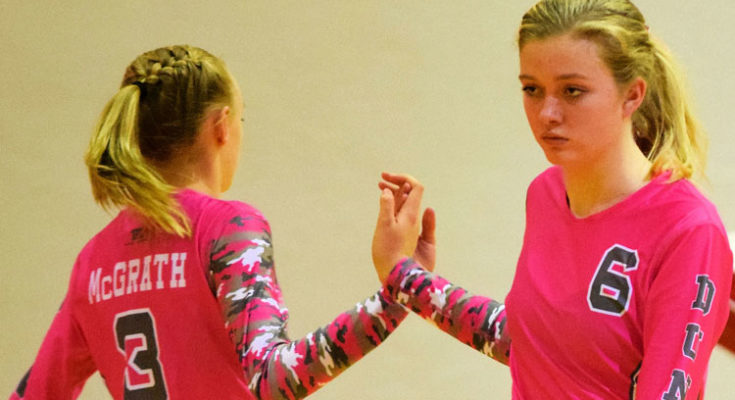 Although a ball or two dropped in between a couple of players during the home match with Valley Union, the Wildkats have improved with the more court time they get together.

A total of 96 teams competed in the two-day meet, 24 pools having four teams apiece on the first day and 32 teams in the Platinum, Silver, and Gold Brackets on the second day. Each bracket included the top two finishers (16) in each pool, the third placers (8), and the fourth placers (8) vying to be number one.

The Platinum Bracket included teams from Pools A-H, the Gold I-P, and the Silver Q-X.

Fort Thomas, Pima, and Thatcher also took part in the meet, each finishing atop pools “X,” “M,” and “H.” respectively, with 3-0 records.

Pima left with a 4-2 mark, falling in three sets to 3A Page, defeating 4A Scottsdale Saguaro in two sets, and succumbing in three sets to 4A Phoenix Saint Mary’s. The Roughriders’ pool matches were each 2-set wins over 3A Queen Creek American Leadership, 1A Rock Point, and over 1A Ash Fork.

The Thatcher Eagles posted a 3-2 record for the meet, falling in twos sets to a pair of 3A teams, Chandler Arizona College Prep and to Buckeye Odyssey Institute. Pool wins were in two sets over 5A Surprise Willow Canyon, over 2A Phoenix Arizona Lutheran, and over 4A Tucson Canyon del Oro.