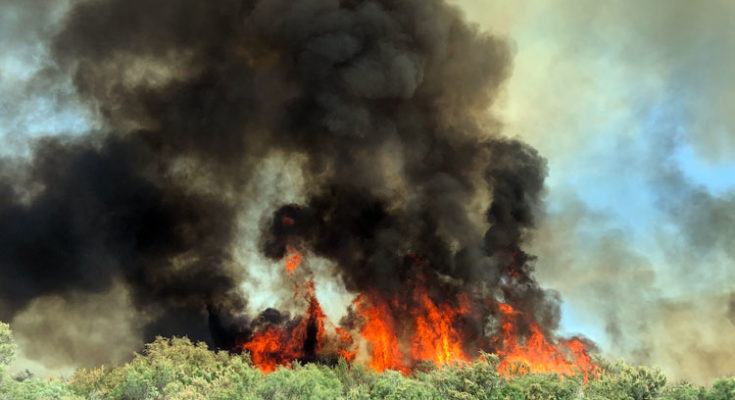 Jon Johnson Photo/Gila River: A wildfire burns along the Gila River in Thatcher near Reay Lane on Wednesday.

Thick, black plumes of smoke could be seen throughout the Gila Valley as the flames attached the brush and consumed it, leaving only a burnt shell in its wake.

The wildfire appeared to be pushing northwest toward the river and Reay Lane. As of about 2:45 p.m., Thatcher firefighters were actively battling the blaze from Reay Lane and atop the bridge over the river in an attempt to stop its westward progression and protect powerlines in the area.

The fire was reportedly started by a man illegally burning trash. The man was previously warned about the illegal burn two days prior to the wildfire, but reportedly began burning trash again on Wednesday and the fire got away from him in the wind. For most of Wednesday, it was burning unwanted brush that has accumulated alongside the riverbed. Firefighters on the scene informed that the brush becomes too thick to manage and when a fire hits it goes up fast.

The fire was being windswept when the Gila Herald left the scene, and firefighters were courageously battling the heat of the fire along with the heat of the day as flames approached the intersection of Reay Lane and Norton Road.

With the river as a natural firebreak to the north and farm firebreaks to the south, the containment at Reay Lane and the bridge was essential to keep the fire from spreading further. After valiant efforts by the Thatcher Fire Department to protect assets, the fire eventually died down later on Wednesday evening.

This article was updated Thursday.