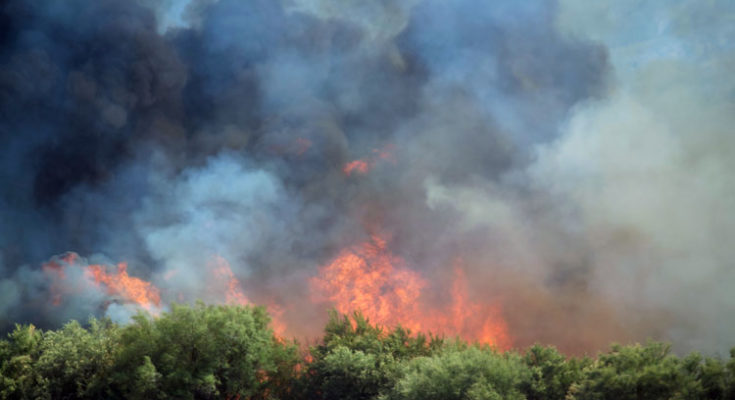 Jon Johnson Photo/Gila Herald: A wildfire is burning north of the Gila River along the riverbed near Pima.

PIMA – A wildfire erupted just north of the Gila River and roughly three miles west of Main Street in Pima on Wednesday.

As of about 3:40 p.m., the fire was burning near the riverbed headed westbound and appeared roughly less than one mile from Main Street. It is burning between a canal for cotton fields and the Gila River and is on private land.

The Pima Fire Department and Graham County Electric Cooperative (GCEC) had numerous units stationed to the east of the fire.

The fire began shortly before 2 p.m. when a contractor clearing out a farm canal accidentally “bumped” a low-hanging utility pole’s guidewire. The guidewire remained intact, according to the contractor, but the energized wires were apparently lowered to the point where they contacted trees in the area and caught them on fire. The contractor had been working on clearing the canal for some time and was on his last day on the job when the accident occurred. The contractor and his workers attempted to put the fire out and they and local farmers also battled the blaze in an attempt to save the utility poles to no avail.

Bureau of Land Management was called to the fire but then left after learning it was on private land and not land managed by BLM.

GCEC cut the power and diverted the utilities to reenergize power for residences. The fire spread to several utility poles and at least one pump in the area. There didn’t appear to be any other structures in the fire’s path toward Main Street.

As of 5:40 p.m., the Pima Fire Department was still actively battling the fire but it had stopped its eastward progression prior to the Pima Bridge and was burning more on its western front. A smoky, white haze hung throughout the area, but gone were the large columns of thick, black smoke, with only small periodic patches remaining.

Update: The Pima Fire Department was aided by favorable wind shifts while battling the fire, which caused it to go back toward the west and then, ultimately, to the north where it burned overgrowth and had nowhere else to go. As of Thursday afternoon, there were some reported hot spots remaining but the fire was basically extinguished.