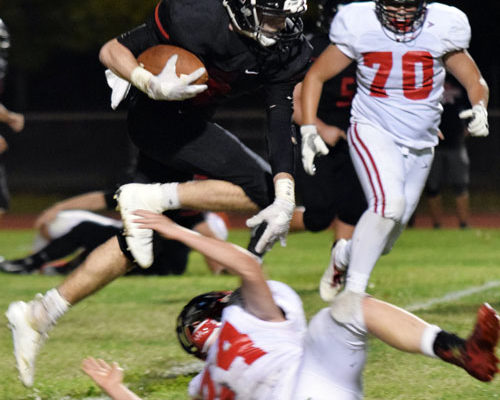 Raymundo Frasquillo Photo/Gila Herald: Senior Isaac Pacheco hurdles a Willcox defender en route to a long gain. Pacheco scored twice at the start of the second half, on a kick-off return and on a punt return.

Morenci won the coin toss, deferred until the second half, and recovered its onside kick. The Wildcats drove 45 yards in six plays plus a penalty, for the games’ initial score. A Brandon Blair to Mark Roybal aerial for 10 yards with 3:08 elapsed gave the Wildcats a 6-0 lead. The conversion run attempt was stopped.

A Willcox fumble on third-and-7 was recovered by Isaac Pacheco. Blair connected with Ruben Casillas on first down and he scored from 32 yards out. A Christopher Roybal conversion kick raised the margin to 13 points with 7:07 left in the opening period.

Morenci was short on fourth-and-20 after gaining 15 yards and marched 37 yards in seven plays for another score. Blair ran in from seven yards out and the conversion attempt was short. Morenci led 19-0 with 7:00 left in the half.

The Wildcats had three other possessions, ending short on fourth-and-6, punted on fourth-and-15, and were intercepted on first-and-20.

The Cowboys got the ball with 3:25 left in the third period but were intercepted on third-an-7, only to return the favor after Morenci gained 11 yards. Quarterback Brady Welch ran in from the two with 1:23 left in the period. The conversion run was stopped.

Morenci controlled the ball for nearly eight minutes but was short on fourth-and-15 after gaining 26 yards on 11 plays.

Willcox got the ball 82 yards away, fumbled on the 19, and Carlos Bray ran in from six yards out on the second play. The conversion kick gave the Wildcats the final 38-6 score.

The Cowboys got the ball a final time 75 yards away but were short on third-and-20 as time ran out.