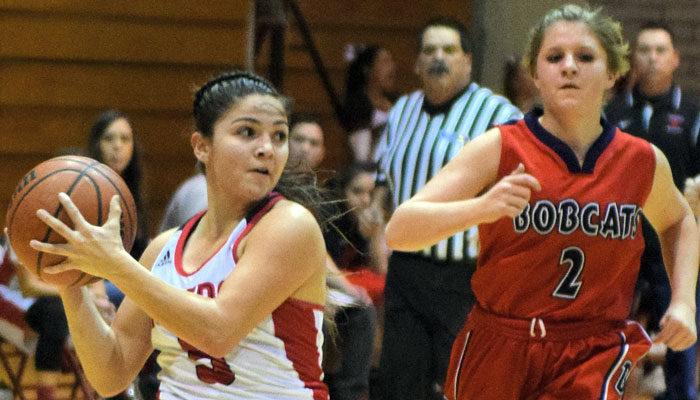 Raymundo Frasquillo Photo/Gila Herald: Junior guard Desiree Babb finds an open teammate and readies a pass to her. She finished with 11 points against Benson on Tuesday, but the Bobcats prevailed 47-38.

MORENCI – The Morenci Wildcats came up short in the region contest with Benson on Tuesday, falling 47-38. The Wildcats returned from the reconfigured Globe Invitational with a 2-2 record Jan. 4.

“It was originally a three-day meet with 16 teams, but four dropped out and it was shortened to two days,” said Morenci head coach Albert Ortega. The additional court time for less experienced players was achieved.

The Wildcats outscored the Bobcats 25-24 in the second half but were unable to completely erase the opening-period deficit. Benson led 15-8 following the opening period, 23-13 at halftime, and 30-28 heading into the final period.

Morenci came within three points late in the game, but no closer. The Wildcats had trouble defending two Bobcats and making free throws, connecting on only 40 percent (16-40) of them.

Benson’s Kaysen Maakestad made five of the seven first period field goals, largely from the low post. She was limited to four the rest of the game. Emily Darwin scored five field goals through the first three periods and five in the final period.

Morenci had a 12-6 advantage following the opening period, led 22-15 at halftime and 35-22 heading into the final period.

Morenci scored in double figures during three of four periods compared to single digits in four periods by Superior. The Wildcats led 16-5 after the first period, 31-13 at halftime, and 43-13 at the start of the fourth period.

The Wildcats led 15-12 following the opening period and had a 13-11 final period outing, but were outscored a combined 32-14 in the second and third periods to trail 44-29 at the start of the fourth period.