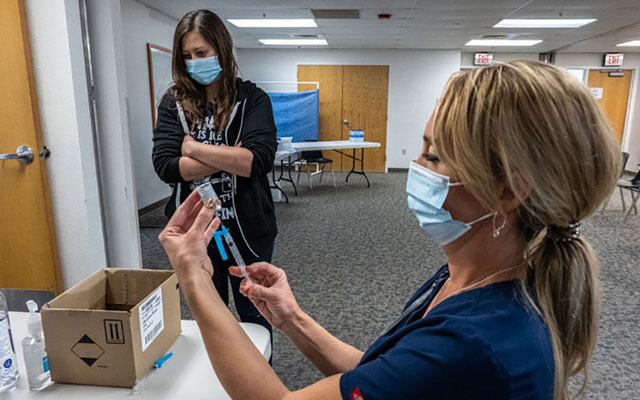 File photo by Juan Arredondo: Copper Rim Elementary School paraprofessional Chelsea Holyoak waits for her second dose of COVID-19 vaccine in February. Vaccinations – or masking and regular testing – would be mandatory for most workers under new federal rules.

WASHINGTON D.C. – Just hours after the Biden administration issued regulations Thursday to require that businesses mandate COVID-19 vaccinations for their workers, Arizona officials were vowing to fight what one called a “direct attack” on personal liberty.

But health officials welcomed the Occupational Safety and Health Administration (OSHA) move that they said will save lives and is well within the federal government’s powers.

“There’s no question this is within OSHA’s authority. This is a very business-friendly regulation and it isn’t going to be a big deal for businesses to implement,” said Dr. Georges Benjamin, executive director of the American Public Health Association. He invited critics to “bring the lawsuits on.”

That is exactly what Arizona Attorney General Mark Brnovich said he will do, vowing to file suit as soon as the new regulation is officially posted and takes effect Friday.

“When faceless government bureaucrats dictate what you must inject into your body, that’s the furthest thing in the world from a safe workplace,” Brnovich said in a prepared statement. “The government doesn’t get to be your nanny, and it’s certainly not your doctor.”

Brnovich is targeting OSHA rules, unveiled Thursday, that order businesses with more than 100 employees to require that workers either be vaccinated or that they be tested for COVID-19 every week and masked while at work.

The Emergency Temporary Standard will also require that employers provide paid time off for workers to get vaccinated and paid leave, if necessary, to recover from any vaccination side effects. Employers will not be required to pay for workers’ testing or face coverings.

Employers will need to have plans in place by Dec. 5 and will have until Jan. 4 to have workers fully vaccinated or in a testing regimen.

“OSHA estimates that this rule will save thousands of lives and prevent over 250,000 hospitalizations during the six months after implementation,” a senior administration official said during a White House background briefing for reporters Wednesday.

The OSHA rule comes the same day that the Centers for Medicare and Medicaid Services announced similar requirements for health care facilities that get federal funding. They will also have until Jan. 4 to have all workers vaccinated – an extension of an earlier Dec. 8 deadline.

President Joe Biden said Thursday that the two new regulations will “cover about 100 million Americans – two-thirds of all workers in America.”

The Centers for Disease Control and Prevention said that 78.4% of Americans age 12 or older had received at least one dose of a COVID-19 vaccine as of Thursday. That compared to 69.9% of the same age group in Arizona, according to the Arizona Department of Health Services.

The new rules come as the state and nation continue to grapple with the coronavirus delta variant, which sent cases surging again this fall after a lull over the summer. In Arizona, the seven-day average of new cases rose from about 500 a day in July to as many as 3,000 a day this week.

“Having unvaccinated employees harms businesses as workers fall ill, spread the virus in the workplace, and businesses are forced to close and quarantine for extended periods of time,” Grijalva said. “Right now, people are uncomfortable risking themselves or their families to be in unsafe working conditions – and that must change.”

Arizona business leaders said they support vaccinations for their workers, but not a “one-size-fits-all” mandate from Washington.

“Responsible Arizona employers of all sizes are doing their part to slow the spread of COVID-19 and protect their workforce and customers,” said Danny Seiden, president and CEO of the Arizona Chamber of Commerce and Industry. “Job creators are not looking to the federal government for advice on how to keep their workplaces safe.

“Bringing this pandemic to an end once and for all requires a partnership and collaboration between the private sector and all levels of government, not top-down, one-size-fits-all mandates from Washington,” Seiden said.

Eric Knott, chairman of the Arizona Small Business Association board of directors, said the standards “put a continued burden on employers” and “could further complicate an already complicated staffing environment.”

Knott said employees who do not want to get vaccinated might instead choose to find a job with a small business that is not required to vaccinate its workers under the new standard.

“Among all the other states in the U.S., we’re in a good spot to weather this storm, but we’d certainly prefer to not have this storm,” Knott said. “It should be left up to individual business owners as to whether or not they want to mandate this stuff.”

Rep. Andy Biggs, R-Gilbert, who has introduced a bill to eliminate OSHA, called the latest action an “unconstitutional overreach.”

“It’s time to restore power and privacy back to the American worker. Abolish OSHA!,” Biggs said in another tweet Thursday.

“OSHA regulations were meant to protect employees in Arizona and across the country from unsafe work conditions – not invade their private lives to implement mandates that address a danger not specifically tied to workplaces,” Ducey said in a statement released by his office.

He said the administration should be focused on helping businesses to get “back on their feet rather than imposing more regulatory burdens.”

But a senior administration official said Wednesday that the Emergency Temporary Standard “is well within OSHA’s authority under the law and consistent with OSHA’s requirements to protect workers from health and safety hazards, including infectious diseases.”

Grijalva, meanwhile, encourages people to continue to take measures to protect themselves and others.

“As we continue to see a rise in breakthrough cases and strained hospitals in Arizona, I encourage individuals to get vaccinated, to get their booster shots, wear masks and continue practicing safe public health protocols,” he said. 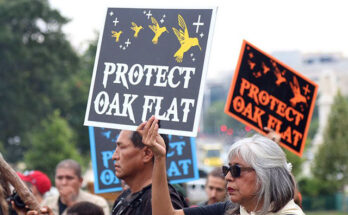 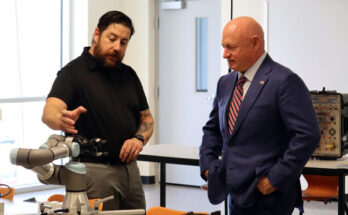