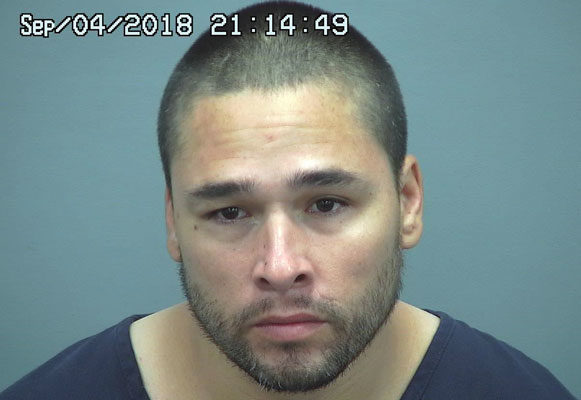 SAFFORD – A welfare check regarding an intoxicated man urinating in the street resulted in the arrest of a wanted man who later became the prime suspect in a hit-and-run collision.

Ysidro Castro Jr., 35, was booked into the Graham County Jail on a warrant regarding a petition to revoke his probation on a possession of burglary tools charge and a traffic warrant.

An officer contacted Castro carrying a gas can while walking in the area of 15th Street and Central Avenue. Previously, a person had called and reported seeing Castro standing next to a gold Pontiac with his pants down urinating in the street. The caller said Castro appeared to be intoxicated and that he retrieved a gas can out of the trunk and left on foot.

Upon contact, the officer noticed several clues of impairment in Castro and asked him where he lived so the officer could give him a ride home. Castro refused to identify himself and continued to walk to the Circle K at Relation Street and U.S. Highway 191.

The officer followed Castro and was informed by a woman that Castro had asked her for money for gas.

After not getting any gas, Castro began to walk back to his car. He noticed the officer was following him and stopped at the corner of 13th Street and 3rd Avenue to inquire why.

While speaking with Castro, the officer overheard a man and woman arguing at a residence on 13th Street. After calling for additional police, the officer contacted the woman, who said her husband was upset because someone had run into her white, 2007 GMC pickup truck while it was parked on the street overnight.

The truck had heavy damage to the rear bumper and the force of the collision drove it roughly six feet forward into a black, 2003 Chevy SUV.

Officers then located the Pontiac Ysidro was reportedly driving in the 500 block of 15th Street, and it had severe front-end damage. Part of the front grill was missing from the Pontiac and was located at the collision site on 13th Street along with an orange signal light that appeared to have come off the Pontiac.

The officer then took Castro into custody and located the keys to the Pontiac in his pocket. Castro allegedly was uncooperative and had to be forced into the patrol vehicle.

He was then transported to the jail and booked on his warrants, with possible charges relating to the collision pending review by the Safford City Attorney.