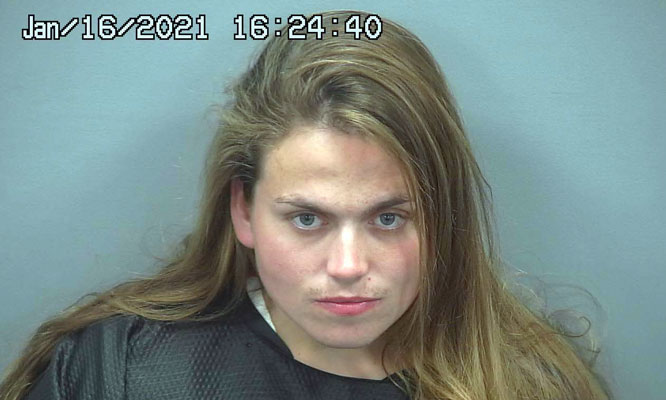 Contributed Photo/Courtesy GCSO: K’ronda McLaughlin was booked into jail on charges of possession of a dangerous drug and drug paraphernalia, tampering with evidence, aggravated DUI, and a warrant.

SAFFORD – A woman wanted on a warrant out of Justice of the Peace District 1 was jailed on additional drug and DUI charges on Saturday after being pulled over for driving with a cracked windshield.

K’ronda Ida McLaughlin, 25, was arrested and booked into the Graham County Adult Detention Facility on charges of possession of a dangerous drug, possession of drug paraphernalia, tampering with physical evidence, aggravated DUI, and her warrant.

According to a Safford Police report, an officer was westbound on 4th Street at about 11:45 a.m. When he noticed a 1999 Subaru operating with a cracked windshield.

The officer initiated a traffic stop and upon contact noticed the driver, identified as McLaughlin, appeared extremely nervous and restless.

Shortly afterward, the officer located an amount of crystal methamphetamine in McLaughlin’s purse, at which time McLaughlin allegedly grabbed the drug from the officer and tried to conceal it.

McLaughlin was placed in handcuffs and the meth was retrieved from her hand.

The officer then learned through further investigation that the vehicle McLaughlin was driving did not have current registration or insurance and that her driver’s license was revoked for failure to pay fines on previous charges.

After McLaughlin failed field tests for impairment, the officer was granted a search warrant for her blood and a sample was taken for testing purposes.

She was then transported to jail and booked on the above-listed charges.