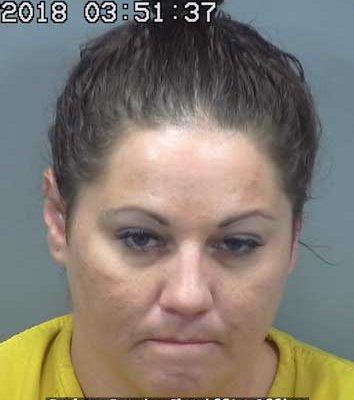 Contributed Photo/Courtesy GCSO: Taylar Dawn Moreno was booked on a warrant after bailing out of a moving truck while fleeing the police.

SAFFORD – When one flees from the cops one doesn’t have time to properly park a car, or so it appears.

Taylar Dawn Moreno, 29, was arrested and booked into the Graham County Adult Detention Facility on Sunday, July 31 on a warrant, after attempting to flee from an officer.

Moreno was wanted on a petition to revoke her probation regarding three separate cases of forgery and theft, unlawful use of means of transportation, and possession of drug paraphernalia.

According to a Safford Police report, Moreno was seen driving a lifted, green Ford pickup truck northbound on 20th Avenue at about 11:42 p.m. The officer passed the truck while southbound and, after noticing Moreno and realizing she had an open warrant, made an abrupt turn to pursue.

Moreno allegedly accelerated away from the officer and made a right turn onto Heritage Place. The officer noted he could hear the truck’s tires squealing as it peeled out down the street.

As the officer turned onto Heritage Place, he reported seeing Moreno exit the vehicle while it was still moving southbound at about 5 mph.

Moreno then fled on foot, ignoring the officer’s commands to stop and climbed over a resident’s block wall as the officer pointed his TASER at her.

The officer followed and caught Moreno in the resident’s backyard. At that time, the officer then saw the same truck headed northbound back out of Heritage Place, and he radioed other officers to stop it. Another occupant of the truck advised that after Moreno bailed she had to move over into the driver’s seat to control the truck. The truck was later impounded.

Moreno allegedly said that she meant to put the truck in park but she was traveling too fast and the gear slipped back into drive, allowing it to continue as she exited the vehicle.

After being searched by a female officer, Moreno was transported to the jail and booked on her warrant without further incident. The officer requested his report be sent to the Graham County Attorney’s Office for review of an additional charge of endangerment.