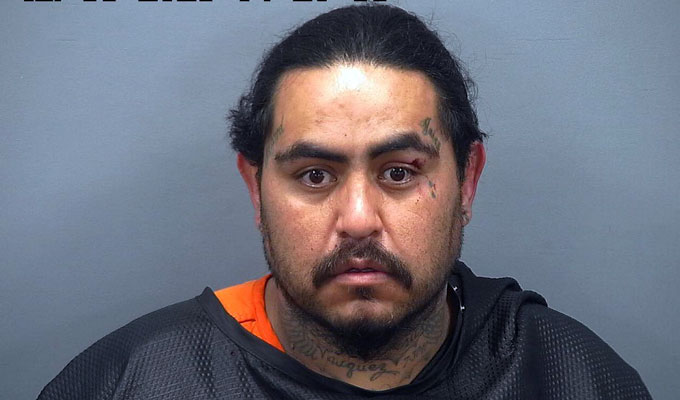 GRAHAM COUNTY – A man known for running from police did so again, but was captured after crashing his motorcycle.

Jesus Jerman Vasquez, 33, was apprehended after wrecking on a motorcycle following a long pursuit by law enforcement that stretched from Safford into Solomon on Jan. 17.

Vasquez was wanted on a previous charge of unlawful flight from law enforcement and criminal damage, as well as a warrant regarding a separate aggravated DUI charge, a separate case involving charges of aggravated DUI and possession of drug paraphernalia, and a warrant for failing to register as a sex offender. Vasquez is listed as being a level 2 sex offender due to a guilty offense of attempted sexual conduct with a minor.

According to a Graham County Sheriff’s Office report, a deputy spotted Vasquez at about 4:36 p.m. riding a motorcycle northbound on U.S. Highway 191 near Relation Street.

Knowing Vasquez had multiple active warrants for his arrest, the deputy followed, and when he noticed Vasquez fail to stop at the intersection of W. Keisha Lane and 8th Avenue the deputy attempted a traffic stop.

Vasquez failed to yield, however, and instead raced through Safford city streets at speeds between 60 to 65-mph, according to the deputy’s report.

At one point, Vasquez dodged a roadblock at the intersection of U.S. Highway 191 and Discovery Park Boulevard and continued to speed eastbound on Solomon Road. He then tried to elude deputies by traveling down a farm road and then doubled back into Safford before crashing in the area of Relation Street.

Vasquez then fled on foot through a cotton field but was apprehended by deputies.

During his arrest, deputies located meth in Vasquez’s pocket along with $300 in cash. After being medically cleared from Mt. Graham Regional Medical Center, Vasquez was booked into the Graham County Adult Detention Facility on his warrants and new charges of possession of a dangerous drug, possession of drug paraphernalia, DUI-drug, unlawful flight from pursuing law enforcement, reckless driving, failure to yield, and failure to stop at a stop sign.

On Jan. 20, the Graham County Attorney’s Office filed charges against Vasquez for possession of a dangerous drug and drug paraphernalia, unlawful flight from law enforcement, and speed exceeding 35 mph while approaching a school crossing. Additional DUI-drug charges may be pending.