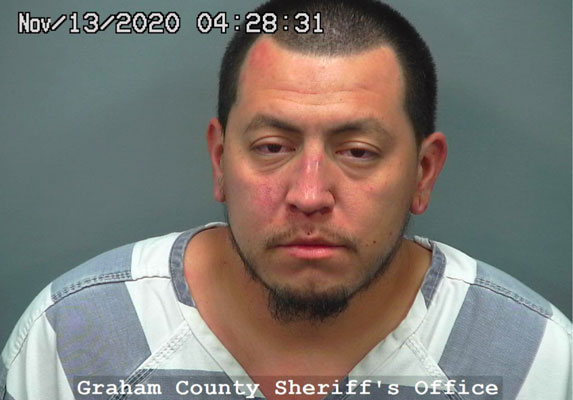 SAFFORD – A man wanted on a no-bond felony warrant for unlawful imprisonment was arrested Nov. 12 after an altercation with multiple officers.

According to a Safford Police report, an officer noticed Morales driving a black Dodge Durango as it left the parking lot of the Circle K at 1542 E. Highway 70 at about 11:24 p.m. The officer noted the SUV’s right brake light was not functional and so he attempted a traffic stop as the vehicle was in the vicinity of Highway 70 and Hollywood Road.

Instead of stopping, however, Morales allegedly fled at roughly 50 mph through the Sunrise Village Mobile Home & RV Resort. The officer followed Morales as he sped through side streets in Safford, but lost him on E. 8th Street.

A Safford Police sergeant was patrolling on Gila Avenue and saw Morales walking on foot. Morales fled from the sergeant toward the Triumphant Learning Center. The officer then came upon Morales on the grounds of the school and commanded Morales at gunpoint to go to the ground.

At that time, the sergeant reported striking Morales in the face at least twice to get him to comply with their orders and to stop resisting. Two Graham County Sheriff’s Office deputies then arrived and the four law enforcement personnel took Morales into custody.

After the ordeal, the sergeant was treated for an injury to his lower back area, and Morales was assessed at the scene by Lifeline Ambulance personnel and then transported to Mt. Graham Regional Medical Center, where he was medically cleared for jail.

During a search of Morales, a green container containing what was believed to be crystal methamphetamine was found, as well as tinfoil with burnt residue and a cut drinking straw with residue inside it. Morales was then taken to jail and booked on his above-listed charges.