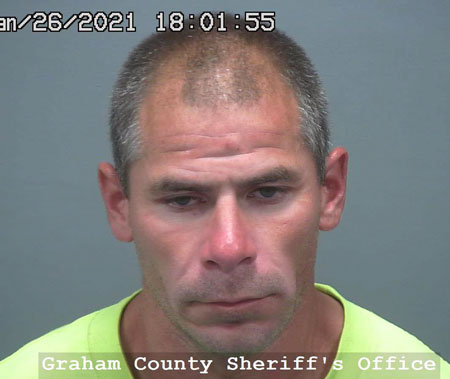 Contributed Photo/Courtesy GCSO: Ruben Arriaga was found with methamphetamine after being pulled over during a traffic stop for having a warrant for his arrest.

SAFFORD – A man wanted on a warrant for failure to appear in court to answer a charge of possession of drug paraphernalia was apprehended with methamphetamine during a traffic stop.

According to a Safford Police report, an officer was on patrol at about 2 p.m. on Jan. 26 in the 800 block of U.S. Highway 70 when he noticed a black Chevy Silverado being driven by a man he believed to have a warrant.

The officer ran a records check and confirmed the owner of the vehicle, Ruben Arriaga, 37, did indeed have an active warrant for his arrest out of Pima Justice Court. The warrant was originally issued in October 2020 after Arriaga failed to appear in court regarding the drug paraphernalia charge.

The officer then initiated a traffic stop and Arriaga pulled over near the intersection of 6th Avenue and 4th Street.

During the stop, the officer learned that Arriaga’s driver’s license was revoked due to a prior DUI conviction. Arriaga also allegedly admitted to having “a couple of grams” of meth and a meth pipe in the vehicle’s center console.

During a search of the car, the officer located three glass pipes with apparent methamphetamine residue and Dr. Pepper can with a false bottom that held a baggie of meth.

The officer advised that since Arriaga cooperated with him he would only book him into jail on his warrant and would long-form additional charges of possession of a dangerous drug, possession of drug paraphernalia, and driving on a revoked license. Arriaga was then booked into jail on his warrant and the vehicle was towed from the scene and placed on a 30-day impound.

According to online court records, Arriaga paid a $1,000 bond and was released from jail. He is scheduled to have a preliminary hearing for Feb. 17, at 1:30 p.m. regarding the initial drug paraphernalia charge. The new charges have yet to be filed.