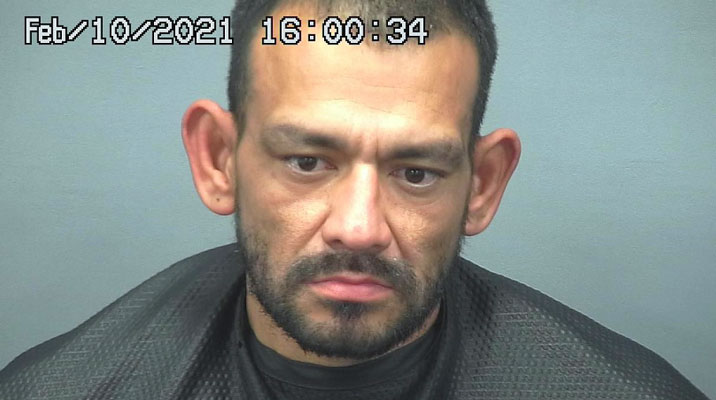 Contributed Photo/Courtesy GCSO: Martin Diaz, 42, was found in possession of methamphetamine after a concerned citizen noticed him passed out in his running vehicle while parked on Main Street.

SAFFORD – A man who said he had been parked in front of Safford City Hall for an extended period of time to use the city’s wifi was found to have an active warrant and was in possession of methamphetamine.

An officer was dispatched at about 10:33 a.m. on Feb. 10 regarding a man who was asleep inside a running vehicle parked on Main Street in front of City Hall. The concerned citizen advised the vehicle had been there since the early morning hours.

The citizen initially contacted Safford Police Chief Glen Orr. Chief Orr advised he just happened to be in the area, so he called in for an officer and went to the scene. When Chief Orr arrived at the location, he located a maroon Chevy Tahoe that was running with a man slumped over the steering wheel.

Upon contact, the driver – identified as Martin Diaz, 42, allegedly advised that he was parked there so he could utilize the city’s wifi service. Diaz also advised that his driver’s license was suspended.

An officer who arrived at the location conducted a records check, which came back with an active warrant related to a criminal damage conviction.

Diaz was then placed under arrest. When asked if he had anything illegal in his possession, Diaz allegedly advised he had some meth and a silk bag containing a meth pipe and a small plastic baggie of methamphetamine was located. A small baggie of marijuana was also found.

Diaz was booked into jail on his warrant, but since he cooperated with the officer additional charges of possession of a dangerous drug and drug paraphernalia, and driving on a suspended license were long formed to the Graham County Attorney’s Office for review and charging.