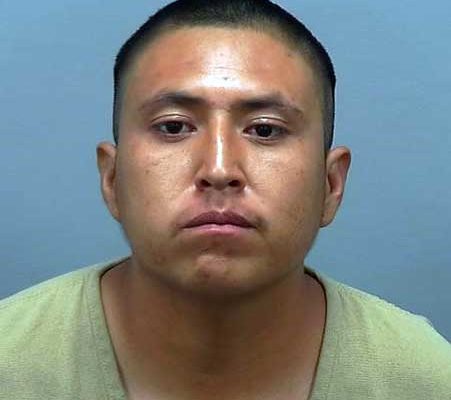 Contributed Photo/Courtesy GCSO: After having a warrant for more than three years for failure to pay his fine, Jeremy Hunter was arrested and attempted to bring a knife into jail with him.

THATCHER – A man who went three years avoiding the police due to a warrant for nonpayment of a fine was caught attempting to sneak a fixed-curved blade into jail when he was finally apprehended.

Jeremy Maurice Hunter, 26, of Bylas, had stayed off the police’s radar since January 2015, when a warrant was issued out of Safford Municipal Court for his arrest for failing to pay his fine relating to a charge of consuming liquor in public.

On Monday, June 11, however, he luck ran out as his “suspicious” behavior at a local gas station prompted the clerks to alert the police.

According to a Thatcher Police report, Hunter reportedly had been in and out of the Giant gas station at 3775 W/ Main St. for more than an hour and every time he entered the store he would cover his face with a bandana. Possibly fearing a potential robbery, the clerks called for the police to remove Hunter from the store.

Officers arrived at the scene at about 9:50 p.m. and encountered Hunter, who initially identified himself as someone else. Hunter would assume three different names for his identity and only eventually gave the officers his real name after being informed he was going to be booked into the jail as a “John Doe”.

Once his identity was clarified and the warrant was confirmed, Hunter was searched and placed under arrest. He was then transported to the Graham County Adult Detention Facility.

Once at the jail, however, a secondary search revealed Hunter had hidden a curved blade down his backside during his initial search. Hunter was found clutching the blade in his left hand, which was still handcuffed behind his back.

Hunter was then booked for his warrant, false reporting to law enforcement and promoting prison contraband.