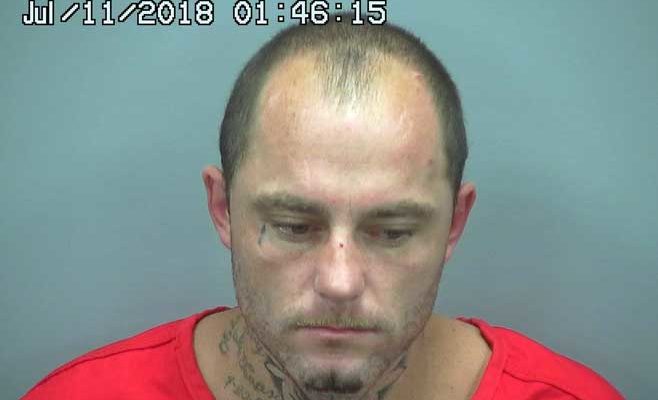 Contributed Photo/Courtesy GCSO: Vincent Andrew Congdon was booked into jail on multiple warrants. During his arrest, an officer located an illegal sawed-off shotgun hidden in a compartment of a vehicle where Congdon was sitting.

SAFFORD – The keen eye of a Safford officer captured a wanted felon and took an illegal firearm off the streets.

According to a Safford Police report, an officer was on patrol at about 10:06 p.m. on Tuesday, July 10, when he noticed Vincent Andrew Congdon, 28, of Safford, standing next to a white van at the gas pumps at the Circle K at 1324 S. 1st Ave.

Congdon, who was wearing two pairs of shorts but no shirt, was ordered to move away from the van and walk toward the police officer. When he was informed he was under arrest for his warrants, he quickly took off the outer pair of shorts and attempted to throw them to the driver of the van. The officer did his best defensive back impersonation and intercepted the toss, however, and soon discovered multiple spent and live shotgun shells in the shorts. As a convicted felon who has not had his rights restored, Congdon is not allowed to be in possession of any firearms or ammunition.

After receiving permission from the van’s owner to search the vehicle, the officer located a sawed-off 12-gauge shotgun in a compartment underneath the front passenger seat where Congdon had been sitting. The shotgun’s barrel measured only 12 inches in length – much shorter than the allowable 18 inches – and its serial number could not be read.

After initially denying knowing about the shotgun, Congdon allegedly told the officer that it belonged to a friend of his and that his fingerprints would be on the weapon because he handled it when his friend showed it to him. Congdon also initially denied sitting in the front passenger seat where the weapon was located but later admitted he had been sitting there, according to the police report.

Congdon was then transported to the Graham County Adult Detention Facility, where he was booked on his two warrants, with an additional charge regarding misconduct involving weapons pending review of the Graham County Attorney’s Office.